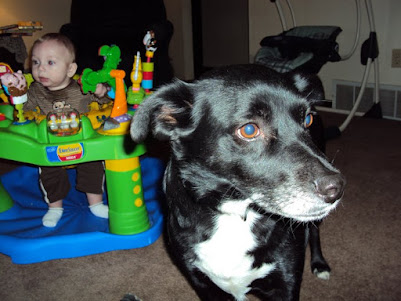 Last month our dog, Nazy, finally crossed the Rainbow Bridge after months of slowly deteriorating, both in physical health and cognitive ability. Nazy was almost 16 years old, and although we had given her a good life, she came from tragic beginnings.

When my nephew was in 4th grade, he and I went to the animal shelter to pick out a pet dog for him. As we were led into the back kennels of the shelter, so many dogs were barking at top volume, going crazy.  All except one—a little black and white dog who sat calmly in her cage. We asked to take a closer look at her, and when my nephew walked in, she jumped up and put her paws on his shoulders and her head on his chest, still not making a sound. We both knew right then that this was our dog.

Her name had been given as Nazy, which we decided to keep because we weren’t sure exactly how old she was and we didn’t want to confuse her by giving her a new name. When we brought her home, Nazy had no hair around her neck, on her ears, or on her hindquarters. We were told that she had been seized from her owner for abuse/neglect. She was terribly allergic to fly bites, which had caused the hair loss around her ears and back, and the missing hair around her neck was from a too-tight collar that had actually embedded itself in her neck and had been cut out.

It didn’t take long to figure out there was more wrong with Nazy than we thought. For the first several years we had her, she would have occasional seizures, possibly stemming from the abuse she endured. Her eyes always had a milky look to them, so we figured she probably didn’t have the greatest eyesight either. You couldn’t touch her hip area without her yelping in pain and snapping at you. Again, we figured this area had been injured during her abusive start to life. She hated having her nails trimmed and even bit a vet tech who decided she could handle her without a muzzle. 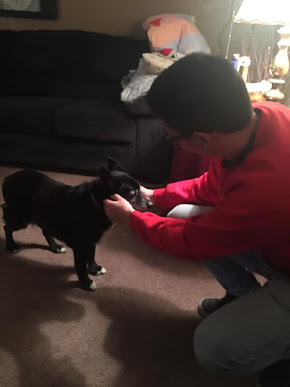 Nazy wasn’t exactly a GOOD dog. She had severe aggression towards other animals, and it took so long to get her to not attack our yellow lab. She would run away any chance she got, and did NOT listen. If you corrected her, or even raised your voice to her, she’d get mad and immediately go tear something up or poop in the house. She was the only dog I ever knew that was actually spiteful.

Still, we loved her and spoiled her up until it was her time to go. I think it hit my mom really hard, because my mom had basically turned her life upside down to care for Nazy during her final months, as she needed so much care. But, I don’t Nazy ever really left…

I was the first to hear her. The day after we put her down, I was about to walk out the front door when I heard Nazy’s signature bark. Nazy never was a normal, barking dog. If she was outside wanting in, she’d let out one sort of high-pitched, yip/woof noise to let us know she was at the door. It’s a very distinct sound, and that’s exactly what I heard. But, the dogs next store started barking right after that, so I figured that I was just missing Nazy and thus, misinterpreted another dog for her. So, I didn’t say anything.

Recently, however, my mom told me that she hears Nazy EVERY night. Nazy was a creature of habit, and when SHE was ready to go to bed, she thought everyone else must go to bed as well, so she’d make that yip/woof noise to let my mom know that it light’s out.

Then, just last night my husband heard Nazy for the first time. He was standing in the kitchen, cooking dinner, while my mom and I were in the adjoining family room. He stopped what he was doing, looked out the kitchen window, then walked over to the patio doors and looked out. He was like, ‘you’re not going to believe this, but I just heard Nazy.’ He described the same high-pitched yip as mom and I had heard, coming from the back porch.

Nazy isn’t the only pet we’ve seen or heard in my mom’s house, well after their bodily death. I just hope if she is sticking around, she’s not terrorizing Ambrosis, my ghost cat, too much!