An international research team with members from ETH has developed a new method for directly imaging smaller planets in the habitable zone of a neighboring star system. This opens up new possibilities in the search for extraterrestrial life.

Alpha Centauri A (left) and Alpha Centauri B are located in the constellation of Centaurus (The Centaur), at a distance of 4.3 light-​years. The star pair orbits a common center of gravity once every 80 years.

In the search for planets capable of sustaining life, an international research team with members from ETH has taken a significant step forward. As the researchers reported recently in the journal Nature Communications, they found signs of a Neptune-​sized planet in the Alpha Centauri star system, a mere 4.4 light years away from Earth. This exoplanet is located in a zone that may offer suitable conditions for life. The team was able to collect data with unprecedented sensitivity, thus registering even very weak signals.

Earth is a disruptive factor

Thanks to the new process, the researchers have advanced one step closer to a major goal of exoplanet research: the discovery of Earth-​like planets capable of supporting life. Direct imaging of planets delivers information about the composition of their atmospheres and possibly even signs of life. To date, however, direct measurements have mostly found exoplanets that are larger than Jupiter and orbit far away from very young host stars. In other words, these planets fall outside the habitable zone where liquid water could form.

One reason that the search for Earth-​like planets has so far proved fruitless is that it has been conducted in the near-​infrared range, even though Earth-​like planets that might have water are brightest in the mid-​infrared range. Yet it is precisely in that range that measurements with normal telescopes are difficult, because that is where the Earth and its atmosphere are also at their brightest. This means the faint signals from exoplanets are lost in particularly strong background noise. 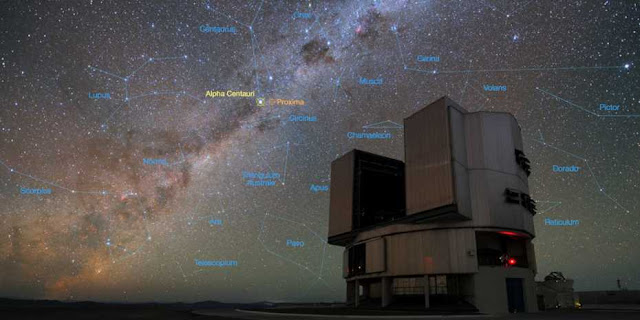 As reported in their study, the researchers have now been able to overcome this difficulty and take measurements in the mid-​infrared range. They used the Very Large Telescope at the European Southern Observatory in Chile to examine Alpha Centauri stars A and B, logging nearly 100 hours over the course of a month. “Keeping the telescope pointed at the same star for such a long time is highly unusual,” explains Anna Boehle, a postdoc in ETH Professor Sascha Quanz’s group. As second author of the study, Boehle was heavily involved in evaluating the data. “We assessed more than five million images,” she says.

To be able to detect the faint signals from potential planets, the researchers not only processed a huge volume of data, they also employed two sophisticated measurement techniques: one was to use a new deformable secondary telescope mirror, which made it possible to correct for distortions in the light coming through the Earth’s atmosphere; and the other was to use a coronagraph to alternately block the light from each of the stars in turn at very short intervals. This let the scientists further reduce signal noise while examining the surroundings of both stars.

Signs of a planet

“Our findings indicate that in principle, this process enables us to discover smaller terrestrial planets capable of hosting life,” Boehle explains, “and it represents a clear improvement over previous observation methods.” Indeed, in their data the researchers found a light signal that may originate from a Neptune-​sized planet. Boehle says, “Whether or not this signal is actually from a planet requires further study. To that end, we plan to combine the infrared measurements with other measurement methods.”