Joe Biden’s anti-Second Amendment nominee to head the Bureau of Alcohol, Tobacco and Firearms (ATF) has a background ripe with controversy.

The Biden nominee’s government career places him on location or being directly involved in some of America’s most infamous events over the last few decades.

Daily Mail reports that Chipman was “at the Ruby Ridge standoff,” in 1992 near Naples, Idaho.

After the federal government entrapped a man into selling two sawed-off shotguns with barrels shorter than the legal limit, the individual suspected a conspiracy against him and refused to surrender when agents showed up to his home.

In what turned into an 11-day standoff, the man’s 14-year-old son, his wife and their dog were all killed by U.S. Marshals and FBI agents.

The father, Randy Weaver, and his three daughters, surrendered after the mother, son and pets were murdered.

The Weaver family was given $3.1 million by the government as part of a court settlement following the tragic incident.

The very next year, Chipman was directly involved in overseeing the Waco Siege.

Breitbart refers to the Waco standoff as “a big, sexy, made-for-TV siege — a PR move to rebuild reputations after the government’s breathtaking debacle at Ruby Ridge.”

According to his own resume, Chipman was the “Case agent in the Branch Davidian Trial.”

The following image shows the Biden ATF nominee standing over a burning pile of rubble while ironically holding a long rifle.

Somewhere in the ashes behind him laid the remains of some 82 Americans, including 25 children and two pregnant women. 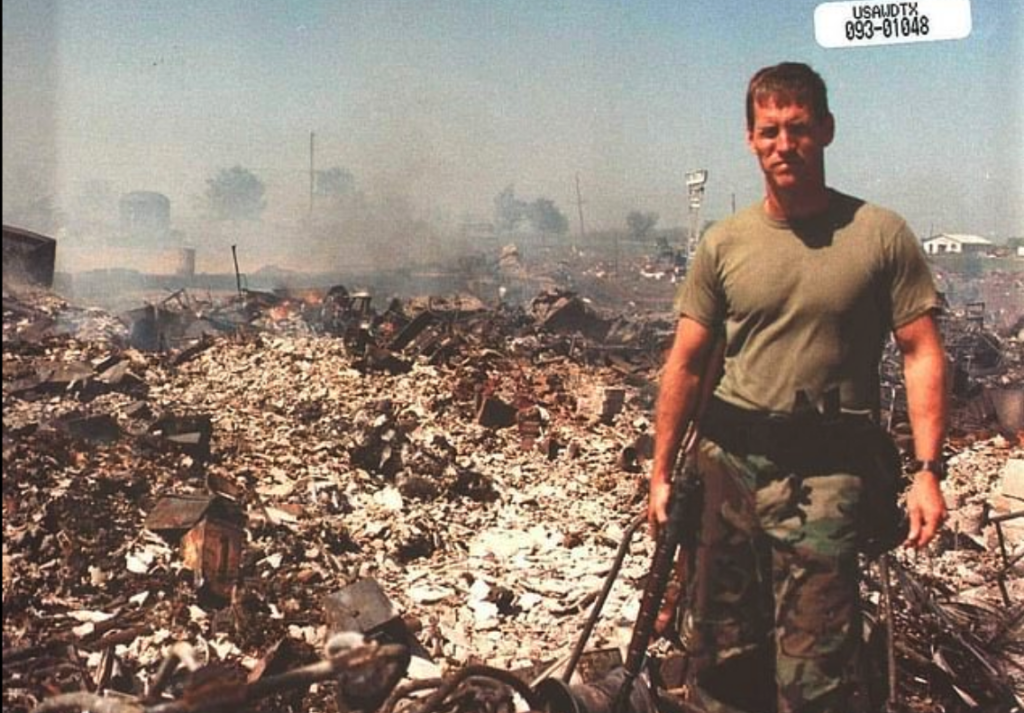 In reality, the choppers were fired upon but were never “shot down.”

During the Waco standoff, federal agents played audio of animals being slaughtered as part of a psychological warfare tactic, used CS “tear gas” and eventually hit the building with a round from a tank that burned the people inside alive.

Women and children were subjected to all of the previously mentioned maneuvers.

Both the Ruby Ridge and Waco killings were sparked by the overzealous ATF infringing upon the Second Amendment rights of U.S. citizens, so it’s understandable that people would be cautious of hiring Chipman to run the entire agency.

In the next historical event Chipman found himself at the center of, the Biden ATF nominee says he “responded to the Oklahoma City Bombing as a Western NRT member.”

Alex Jones was one of the first people to reveal the truth behind the suspicious attack in his 1997 film “America Destroyed By Design.”

The fall-guy for the Oklahoma City attack, Timothy McVey, was ironically spotted on video showing support for the Branch Davidians in Waco, Texas in 1993.

Chipman’s exact role in the Oklahoma City Bombing is largely unknown at this time, but government stooges were involved in the planning, execution and cover-up of the attack.

Fast-forward through a decade or so of government service and Chipman’s career comes to the infamous “Fast and Furious” scandal of Obama’s ATF under then-Attorney General Eric Holder.

Essentially, the ATF used Operation Fast and Furious to convince straw purchasers to sell guns to weapons traffickers who then sold the firearms to Mexican drug cartels.

Meanwhile, during last year’s Reddit AMA, Chipman was bold enough to note that “victims of drug lords in Mexico” are often killed with .50 caliber rifles.

“America plays a role in fueling the violence south of the border,” he admitted without a hint of self-awareness.

While the specific details of Chipman’s involvement in all of these scandals have yet to be revealed, that information could help America further understand the man who may soon be leading one of the nation’s most powerful armed agencies.

Regardless of the fact that he used to play soldier in his younger days in the ATF and that he could soon be in control of a government agency equipped with enough firepower to fight a small war, Chipman will now be using his power to strip the American people of their God-given right to self-defense.

The Biden nominee even supports disarming citizens who have never committed a crime!

“While at ATF I conducted studies involving people who failed background checks to determine how many later committed crimes with a gun—many did,” Chipman said. “This is a perfect opportunity to arrest people before committing crimes rather than responding after the fact.”

If this man is appointed to head the ATF despite the laundry list of red flags showing he’s unqualified, our Second Amendment will be unironically within the crosshairs of “the Biden-Harris Administration.”

Carlson noted Chipman had recently made his Twitter account private, but that the Daily Wire was able to obtain an archived version showing he deleted at least 1,000 tweets in recent days.

However, as Tucker explains, “Chipman told The Hill that AR-15’s should be treated ‘just like machine guns’ — meaning banned. Chipman made that remark in his capacity as a policy adviser for an anti-gun group. In 2012, he suggested on MSNBC that the Secret Service shouldn’t carry firearms. And last year, David Chipman openly mocked the millions of Americans who are buying guns to protect their families from the crime wave Chipman’s party started.”

Chipman said of American gun owners: They might think that they’re Die Hard, ready to go, but unfortunately they’re more like Tiger King and they’re putting themselves and their family in danger, and so what I would suggest is to those first-time gun owners – I would secure that gun locked and unloaded and hide it behind the cans of tuna and beef jerky stored in a cabinet and only bring that out if the zombies start to appear and I don’t think they are.


From the Infowars Archives, this compilation of interviews over the years with Hoppy Heidelberg, former Federal Grand Juror for the bombing of the Murrah Federal Building court case in Oklahoma City, reveals why we still have a lot of work to do in draining the swamp. Almost 20 years later, Hoppy continues to indict the Deep State, FBI, CIA, ATF, and many of the actors who to date have yet to be brought to justice