Today, President Biden announced a series of executive actions aimed at shredding the second amendment, limiting your ability to defend yourself, and apparently confiscating your firearms based on crimes you may or may not commit.

Here’s what Biden’s “executive actions” will do:

Direct the Justice Department to propose a rule within 30 days to ban so-called “ghost guns”. “Ghost gun” is a term invented by gun-hating liberals, intended to scare the public into thinking criminals are making untraceable guns, when in fact this is nothing but an attempt to stop hobbyists and start-up gun makers.

Criminals are not interested in expensive equipment and the time-consuming and laborious process of manufacturing their own firearms like hobbyists when they can simply remove serial numbers by defacing crime guns.  The issue is really a non-issue and will do nothing to stop actual criminals from using illegal guns to commit crimes.

Direct the DOJ to craft a rule within 60 days that clarify the point at which a stabilizing arm brace effectively turns a pistol into a short-barreled rifle, subjecting that firearm to additional regulations.

Pistol stabilizing braces are an item that attaches to the rear of many configurations of commonly-owned semi-automatic pistols that helps stabilize the pistol on a shooter’s arm so that they may effectively shoot the firearm with one hand. These items are particularly valuable for differently-abled shooters who may not have the use of two hands. BATFE has approved several arm braces for this purpose. At present, Americans own over 4 million of these items.

Direct the DOJ to publish, within 60 days, model red-flag legislation, which lets law enforcement officers or family members ask a court to temporarily bar someone from accessing guns under certain circumstances. The White House says the model legislation will make it easier for states to pass their own versions of that law. 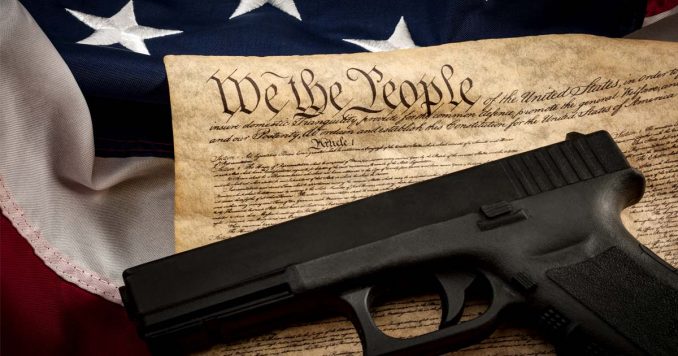 So-called “Red Flag Laws” or emergency risk protection orders (ERPOs) are one of the biggest threats to gun rights in the list of actions; it’s not only unconstitutional, but it is basically punishing you for crimes that you have not committed, in all likelihood never will commit, but for some reason, the government claims may happen.

Red Flag Laws allow the police to convene secret proceedings, in which an American can be stripped of his Second Amendment gun rights and Fourth Amendment rights. In most cases, the gun owners are barred from participating in the hearings or arguing their side of the dispute. The first time the gun owner hears of the proceeding is when law enforcement knocks on the door — ready to raid their home.

They are not there because there is probable cause to suspect the gun owner has committed a crime, as the Constitution would seem to require. Rather, the new Red Flag standard seeks to make subjective determinations on whether the gun owner represents some “threat” to society.

As in the film Minority Report, Americans will be stripped of their fundamental constitutional rights based on the subjective possibility of a “future crime.”

And we know from our limited experience that many accusers lie or make mistakes — even more, reach delusional conclusions — and the target is frequently an abused victim who is most in need of the wherewithal to protect against an abuser.

If the Constitution can be suspended in a secret government hearing, where does that lead?