Data released today by the Centers for Disease Control and Prevention (CDC) included a total of almost 500,000 reports of injuries and deaths, across all age groups, following COVID vaccines — an increase of 27,761 compared with the previous week.

Every Friday, VAERS makes public all vaccine injury reports received as of a specified date, usually about a week prior to the release date. Reports submitted to VAERS require further investigation before a causal relationship can be confirmed. 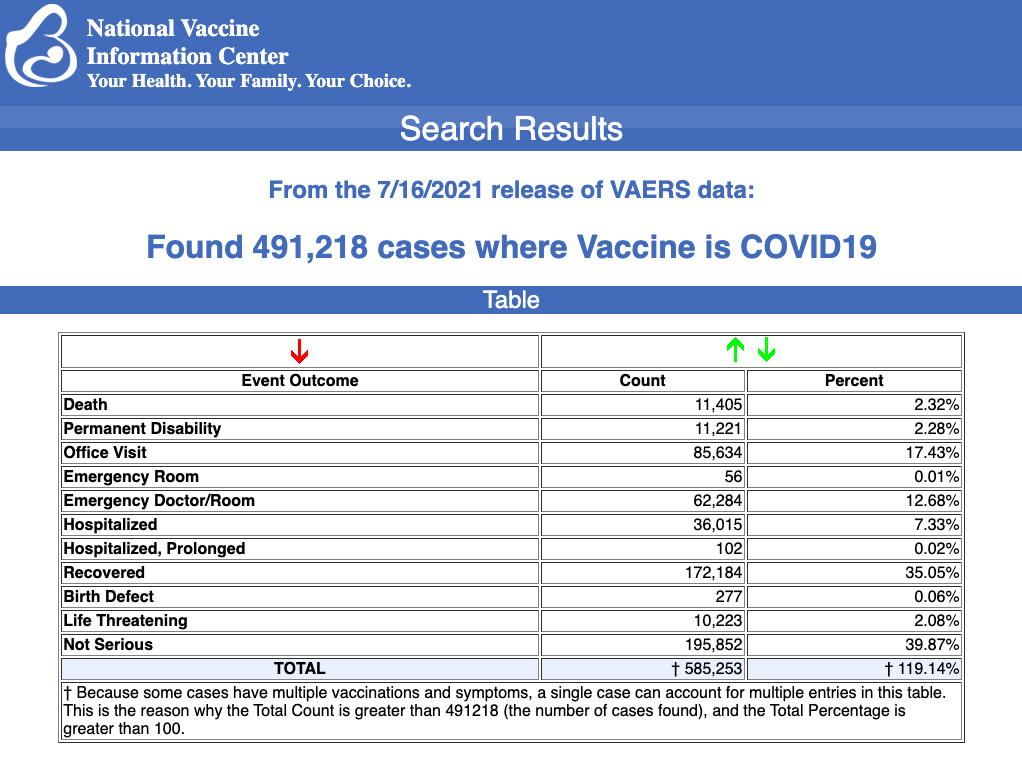 Excluding “foreign reports” filed in VAERS, there were 425,950 adverse events reported, including 5,467 deaths and 33,748 serious injuries, reported in the U.S.

As The Defender reported July 22, a sudden increase in the number of deaths reported to VAERS following COVID vaccination is not correct and was the result of an “error,” according to the CDC.

The CDC said July 16 that since the mid-December rollout of COVID vaccines in the U.S., VAERS had received 12,313 reports of death among people who received a COVID vaccine — a sharp increase from the 6,079 U.S. deaths reported by the CDC the previous week.

Over the past few weeks, The Defender noticed thousands of “foreign reports” entered into VAERS, mostly associated with the Pfizer/BioNTech vaccine. According to the CDC website, when searching VAERS, the “United States, Territories and Unknown” group includes all of the location values, except for “Foreign” locations.

We reached out to the CDC to ask why there were thousands of reports suddenly dumped into VAERS, why the CDC doesn’t publicize the total number of reported deaths — which includes foreign reports — and why there are foreign entities using the U.S. VAERS system. We did not hear back by the set deadline.

“VAERS occasionally receives case reports from U.S. manufacturers that were reported to their foreign subsidiaries. Under FDA regulations, if a manufacturer is notified of a foreign case report that describes an event that is both serious and unexpected (in other words, it does not appear in the product labeling), they are required to submit it to VAERS.”

The Defender will continue to post the latest VAERS numbers weekly, but will differentiate between foreign reports and U.S. reports.

The CDC appears to be looking into ways to work around the Emergency Use Authorizations (EUA), to provide additional vaccines for immunocompromised patients.

Doctors say it is increasingly clear many people with compromised immune systems fail to mount an effective immune response against COVID following vaccination.

Studies examining safety and effectiveness of a booster dose in vulnerable populations are ongoing, and it is unknown whether the low levels of immunity to the vaccine in immune-compromised people can be addressed with an additional dose.

Dr. Sara Oliver, a medical epidemiologist at the CDC, pointed to emerging data that found among immunocompromised patients who had no detectable antibody response after full vaccination, only 33% to 50% developed antibodies to a third dose.

​​There are no plans for the ACIP to hold another meeting, although the panel is currently scheduled to meet in August.

As The Defender reported July 20, according to a press release, AFLDS is asking to immediately stop administration of experimental COVID vaccines in anyone 18 and younger, all those who have recovered from COVID and acquired natural immunity, and every other American who has not received informed consent as defined by federal law.

The authors of the 67-page motion attached a declaration by a whistleblower who alleged deaths occurring within 72 hours of receiving a COVID vaccine are significantly under-reported in VAERS, by a conservative factor of at least five. In a sworn statement under penalty of perjury the whistleblower alleged the actual number of COVID vaccine-related deaths is closer to 45,000.

AFLDS said the findings were shocking, and informed consent is impossible when safety data are not accurate.

According to data updated July 14 by the Illinois Department of Public Health (IDPH), 151 people in Illinois have died from COVID or COVID-related complications after being fully vaccinated. At least 563 fully vaccinated people were hospitalized, IDPH said.

In Massachusetts, public health officials tracked 4,450 breakthrough cases. About 92% of those cases did not result in hospitalization, while 303 people, or 6.8%, were hospitalized, according to Massachusetts Department of Public Health (DPH) data through July 10.

Seventy-nine vaccinated residents in Massachusetts died from COVID, either without being hospitalized or following a hospital stay, DPH said.

Despite being fully vaccinated, more than 656 Alaskans tested positive for COVID between February and June, according to the Alaska Department of Health and Social Services.

Of the 656 breakthrough cases, 17 people were hospitalized and two people died with COVID, though health officials noted both had other “substantial comorbidities.”

According to the CDC website, “the CDC follows up on any report of death to request additional information and learn more about what occurred and to determine whether the death was a result of the vaccine or unrelated.”

On March 8, The Defender contacted the CDC with a written list of questions about reported deaths and injuries related to COVID vaccines. We have made repeated attempts, by phone and email, to obtain a response to our questions.

Despite multiple phone and email communications with several people at the CDC, and despite being told that our request was in the system and that someone would respond, we have not yet received answers to any of the questions we submitted. It has been 137 days since we sent our first email to the CDC requesting information.

Children’s Health Defense asks anyone who has experienced an adverse reaction, to any vaccine, to file a report following these three steps.

Megan Redshaw is a freelance reporter for The Defender. She has a background in political science, a law degree and extensive training in natural health.

Loading...
"Not by might, nor by power, but by my spirit, saith the Lord of hosts." Zechariah 4:6
BEFORE IT'S NEWS ON TELEGRAM
GET THE TELEGRAM APP - https://telegram.org/ JOIN OUR CHANNEL - https://t.me/BeforeitsNews
Read it..
BEFORE IT'S NEWS
SIGN UP FOR OUR NEWSLETTER
Today's Top Stories
Trump Called Emergency at GITMO - Military Broadcasting With CNN & Fox! - Must Video
New Juan O Savin "Something Big Is Coming"
X22Report - Out They Go! Clean House Is Very Important! Deep State Panicking Over Durham & AZ Forensic Audit! - Must Video
Military Deployed All Over Texas! Arrest Order Confirmed! - Must Video
Durham, Indictments, Justice, Delta's, All Together Now! Pray! - AWK Must Video
New Benjamin Fulford: Is an Asian Secret Society Planning to Take Down the West and the Rockefeller-Rothschild Empire?
VIDEO: Again Mass Arrest is Happening at PENTAGON! Military Called TRUMP!
Juan O Savin~David Nino Rodriguez "Something Big Is Coming"
Situation Update, 9/17/21 - Will There Be Enough Vaccine Survivors to Rebuild Civilization After the Collapse? - Mike Adams, Health Ranger, Must Video
Former Navy Seal/CIA Michael Jaco: The Movie Is Reaching a New Level Where Everyone Needs to Be Involved! - Must Video
Loading...
Featured
Lara Logan — ‘Biden Is Preparing for an Attack on U.S. Soil'
New Stew Peters: Breaking Exclusive! Feds NCIC "Terrorist List" Exposed!
NEW VIDEO RELEASED: Shock Footage Shows Countless Migrants Wading Across Rio Grande into America
The Georgia Guidestones: It's Time To Bring Justice On The Wicked Heads Of The Globalists Who Etched Their Crimes In Stone
Graphene Oxide in Killer Vaccines (Hope & Tivon) Part 1 and 2 (SGT Report)
Funeral Director Blows the whistle: “Delta Variant’ is Vaccine injury
Mark Taylor Powerful Message! Trump Will Be Back One More Time - 2021
An FDA Panel Overwhelmingly Rejects the Pfizer Booster for 16 and Older - States Boosters Only for Elderly, High-Risk Individuals
Supreme Court poised to hear biggest challenge to Roe v Wade in 48 years
Happy Constitution Day! Biden Labels Founding Fathers' Document Racist, Sexist, Xenophobic! Issues Terrorism Advisory WARNING!
Top Global
Lara Logan — ‘Biden Is Preparing for an Attack on U.S. Soil'
Uttar Pradesh, India Announces State Is COVID-19 Free Proving the Effectiveness of IVERMECTIN (The “Horse” Drug Democrats Mocked And LIED About)
Graphene Oxide in Killer Vaccines (Hope & Tivon) Part 1 and 2 (SGT Report)
The Globalist Cabal World Conquest End Game Is Near, After 120 Years of Satanic Deeds and Evil Plans. How the USA Got to This Point
Funeral Director Blows the whistle: “Delta Variant’ is Vaccine injury
UK Dr: Vaccines the magnetism added intentionally
Are Covid Vaccines Engineered to Disable Our Immune Systems?
Catherine Austin Fitts – Covid 19/11 Narratives Intertwined
TELL YOUR GOVERNOR TO END THE COVID-19 STATE OF EMERGENCY
Friday Speak Out!: Prompted
Loading...
Top Alternative
A Word To Our Deep State And Liberals
Something bizarre happened at that deposit in Georgia, United States. What is it? Demons?
700 Earthquakes Inside A Week Rattle Canary Islands - Volcanic Eruption Speculation Abounds
Ammunition sales to Americans surge 600% during the Plandemic
The Party of Chaos! Fire every Republican on the "Assembly education committee," and fast!!!
'An Insane Excessive Stock Market Bubble Today,' Current Overvaluation in the Market
Black Goo, Dark Matter, & the Prince of Darkness (2021) KJOzborne
Dragon Alert! Intact Specimen with Soft Tissue Now Held Under Guard by Brazilian Authorities! via FL Maquis
Hospital Stops Delivering Babies Because Staff Quit Over Vaccine Mandate
Hey, Zuckerberg? F U !