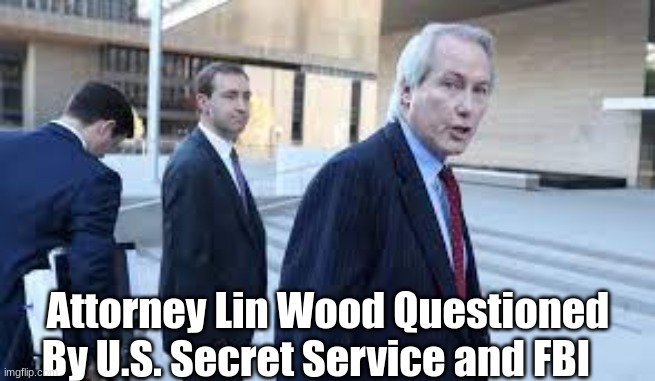 Former Navy SEAL David Hancock, who performed IT security on Attorney Lin Wood’s plantation shortly before the 2020 election, has made an announcement about Wood being visited by feds.

Hancock worked on Wood’s plantation along with other military men, including Jeff Wobig, who is connected to a CIA agent that used the alias of “Pastor – FBI Agent John Regan” to traffic children through the Ukrainian Embassy in Washington DC.

On January 4, 2021, Wood tweeted a link to President Trump that featured a MEMO by Timothy Charles Holmseth to AG Sessions warning Trump about Mike Pence and an international human harvesting operation being run by FBI agent John Regan.

Wood told Trump he possessed key codes to videos of world leaders raping and murdering children. Wood said he would only give the videos to Trump, retired General Michael Flynn, and/or Attorney Sideny Powell.

David Lester Straight told Timothy Charles Holmseth he viewed a video of Mike Pence raping a little boy. Straight said he viewed the video because he had “Secret Service” credentials and once protected “George Bush”.

The following is Hancock’s Press Release:

The Secret Service called me after his comments about VP Mike Pence. They asked me for a layout of the property and for other details.

The Secret Service and the FBI visited Lin at his property at least few times in relation to his comments and other concerns they had about Lin.

The LIN SPIN happened when Lin told his followers that HE spoke with THEM about the JHTH nonsense.

Here’s a hint of what’s to come. Why do you suppose all of President Trump’s most ardent supporters have either been questioned or subpoenaed by the J6 committee but NOT Lin Wood, especially given the rhetoric Lin was posting. Including, but not limited to, Lin’s post demanding the firing squads shoot Mike Pence first.