Africa Superheating From Ground Up Unlike Never Before!! Thousands Of Fires Recorded On Satellite Map!! Find Out Why This May Affect You On The Other Side Of The Planet!! Dutchsinse Says Extreme Seismic Unrest Is Spreading!!

Zetatalk: As the Africa foot slides into the void opened in the S Atlantic, while the top part of the Africa Plate remains frozen in place along the Mediterranean, the Africa Plate is forced into a bend. The stress of this showed up on NASA’s FIRMS service map, and on the maps showing Sulfur Dioxide (SO2) and Carbon Dioxide (CO2). 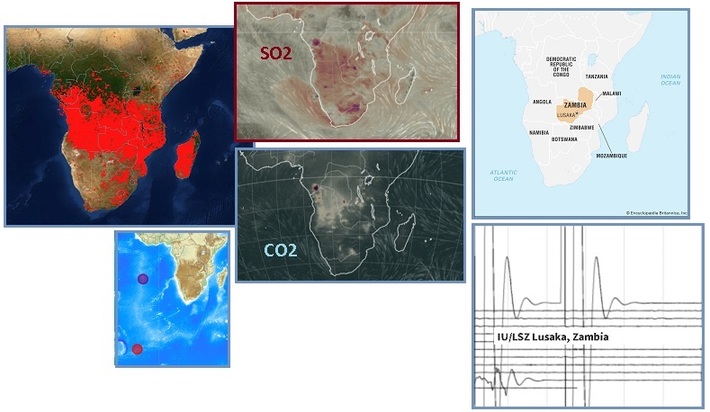 Wow, Africa Roll is heating the superheating the ground and starting fires over a wide swath of Southern Africa!  Nowhere is there a word that Africa and Madagascar are now almost solidly burning, judging by the look of NASA’s FIRMS service map. Someone better try to check a map of carbon dioxide emissions or something, because it’s too many fire sources per last 24 hours, there are literally thousands of them on this map.

ZetaTalk Prediction 9/13/2022: The sequence of events that would lead to the New Madrid finale are in process, and the S Atlantic is now spreading open, allowing the foot of Africa to shift over into the void being opened.  This process has been documented on the quake maps by quakes along the Antarctic border while the Antarctic Plate pushes up into the S Atlantic. Until the rock hook under Turkey snaps off, allowing Africa to drop on its eastern side, the slide into the S Atlantic attempts to bend the south part of Africa. This can be seen from hot Earth, CO2 emissions, SO2 emissions, and the Zambia Heliplot.

IITM: Okay so we have both the Zetas and Dutchsinse saying something major is imminent.

The news confirms major fires in southern Africa… but like the Zetas said… there is a massive silence too… is it happening as they describe?

Also there’s an electricity crisis in the same area… related?

There were reports of major fires even closing airports about 20-30 days ago.

Check out this map…

Here is a recent map I took just NOW from NASA website…. yeah, I know… NASA… but it’s what we have at the moment… use your discernment… Okay okay… something is happening right? Lots of ground may be SUPERHEATING!!

One scenario the Zetas say is that a rock hook in Turkey will SNAP…and this will trigger a breaking up of African continent!! Maybe the superheating ground is proof of some immense built up pressure??

When the Africa Plate rolls to the east and drops, during the 7 of 10 scenarios, this will of course affect Egypt and its connection to the Sinai Peninsula. The Straits of Gibraltar will widen by 125 miles, as Africa drops, and Morocco will move 50 miles further east. Where the Sinai Peninsula is considered part of the African Plate, the Red Sea is clearly ripping open. Thus both the Red Sea at the Gulf of Suez and the Gulf of Aqaba tearing up into Jordan will rip open, leaving the Sinai Peninsula positioned like an island with few direct attachments. We have stated that Egypt can find itself in the center of a migration route, as mankind will remember that a handy route into Africa exists there, and that Africa is a rich continent with a high elevation. Portions of Egypt may find itself under water when the sea level rises to 675 above today’s level, but most will not be under water. But the crowd of people passing through Egypt will make survival there almost impossible. Any food grown will be taken.

The Zetas started describing progress towards the Pole shift on a scale of 1-10 in March 2008 (starting at a 2-3) and afterwards were asked for updates on the progression as we slowly moved up to a 6 and beyond. At the end of 2009 Nancy recalled a holographic presentation given to her during a visit which gave the first indications of what to expect during a 7 out of 10, that at least one of the events would occur in 2010 and what effect this might have on plans being made, the population in general and the economy. They advised what causes the 7 out of 10 scenarios and whether governments will become more open and warn their citizens and what would happen to the cover-up; also that anxiety would increase and that people are still in denial about what it all means for them.

After hints regarding timing of the events, the Zetas disclosed detailed information on what will occur and explained why the release of information, revealing that the event expected before the end of 2010 was the sinking of the Indonesian tongue of the Eurasian plate. People were still sceptical about the prediction or angry when things didn’t happen as expected. Others worried about being cut off from Zetatalk, nuclear reactor accidents and skyscrapers collapsing.

In Indonesia, precursors were noted on the eastern side of the Indo-Australian Plate and in Bangkok among others. UFOs were seen in China and Taiwan, warning of what was coming, while the major leaders resisted taking the message seriously. The Zetas gave warnings for Singapore, the Philippines, India, Hong Kong, the Mentawai Islands and the Bonin Islands. They also advised of the possibility of tsunami occurring or China suppressing their media but said that volcanoes would not increase in activity more than they already have. They also provided detailed information on how much sinking would occur across the plate and more fully explained the folding Pacific.

For South America, the Zetas have described what the continent can expect, whether any tsunami will occur and which major cities will be affected, along with predictions for the Caribbean, the volcanoes there and Central America, including Mexico. These changes are all expected to follow closely behind the adjustments in Indonesia.

The Africa roll comes next with the Zetas describing the plate movements but can’t give all the details, although the effects on Italy, South Africa, the Canary Islands and Egypt were explained.

The size of the quakes and tsunami that will strike Japan was addressed with UFO warnings for North America as they will also experience quakes and a tsunami. Vancouver and Hawaii were also detailed.

The New Madrid earthquake follows the big quakes in Japan and will continue to adjust up until the pole shift after one big jolt which also causes the St Lawrence Seaway to split and how there will be no doubt it has occurred. The west coast reacts to the large quake which will tear communication cables but no volcanic activity is expected in the Eastern US. The Zetas were also asked about Florida, Chicago and how it would compare to the pole shift.

Just hours afterwards, the North Atlantic Rift tears sending a tsunami racing towards Europe, propelled by the gulf stream. The Zetas describe how it hits the Bristol Channel, the Irish Sea and passes through the English Channel to hit the east coast of Britain, devastate Denmark and what the residents of Denmark can expect. Sweden and France will be hit (among others) but Iceland and the Arctic Circle will be unaffected. Advice is given on how to warn people and how far inland to be although water will wash inland along rivers. There will be repeat tsunami but smaller and how the different countries will react is mentioned.

The 8 out of 10 events are mentioned but little detail is given out. We’re told that they may include exploding oil fields in Iraq, blending of the seasons, continuous plate movement, increased visibility of Planet X and there’s something in store for Italy. All of the 7 out of 10 events will complete before we move to an 8 but they will warm up during that time and the last weeks which is the 9 out of 10 have been detailed.

In 2011 we have arrived at a 7 out of 10 with buoys showing the effect on the Philippines, flooding in Australia and Sumatra and Java sinking. The Java coastlines shows undeniable sinking while the media excuses switch from rain to high tides. Sudden mass instances of dead birds and fish show the increase of earth movement around the globe but the pace is slower than the Zetas first anticipated although South America starts showing signs of what’s next. This delays have forced the elite to change their plans. Plate movements will create a skew in the longitude/lattitude for some lands, as shown by Japan after the March 11, 2011 quake.

By 2012 it was evident that the 7 of 10 pace had been slowed by the humming boxes discovered on occasion along fault lines and plate borders.

This happened on BOTH coasts yesterday nearly ONE hour apart!

Earthquake Weirdness In Mexico!! For the third time in 37 years,…

Flat Earthers Hate It When You Bring This Up… So Here…

China Is Painting Mountains Green To Fool Environmentalists – No, Really

A New Type Of Thunder?? Sky Rumbled And Roared For What…