The plague of boils falls on those who carry the Mark Of The Beast; it resembles the 6th Egyptian plague. See Exodus Chapter 9 Verses 8 – 12.

The First Of The Three Bowls Of The Book Of Revelation

Bill Gates and the World Health Organization have started drafting a New World Order global pandemic treaty on pandemic preparedness that would grant it absolute power over global biosecurity, such as the power to implement digital identities, vaccine passports, mandatory vaccinations, and travel restrictions.

World Health Organization Pandemic Treaty: What It Is, Why It Matters and How to Stop It

FROM THE DEFENDER: The globalists that brought us the wildly exaggerated COVID pandemic in an effort to cement a biosecurity grid into place are now hard at work on the next phase of this New World Order. The World Health Organization has started drafting a global pandemic treaty on pandemic preparedness that would grant it absolute power over global biosecurity, such as the power to implement digital identities/vaccine passports, mandatory vaccinations, travel restrictions, standardized medical care and more.

In “The Corbett Report”, above, independent journalist James Corbett reviews what this treaty is, how it will change the global landscape and strip you of some of your most basic rights and freedoms. Make no mistake, the WHO pandemic treaty is a direct attack on the sovereignty of its member states, as well as a direct attack on your bodily autonomy.

A back door to global governance

As noted by anti-extremism activist Maajid Nawaz in an April 28 Twitter post, the “WHO pandemic treaty serves as a backdoor to global empire.” COVID-19, while potentially deadly to certain vulnerable groups, simply isn’t a valid justification for handing over more power to the WHO, especially in light of its many inexplicable “mistakes” in this and previous pandemics. As just one example, the WHO didn’t publicly admit SARS-CoV-2 was airborne until the end of December 2021, yet scientists knew the virus was airborne within weeks of the pandemic being declared. The WHO also ignored early advice about airborne transmission.

Remember a few weeks ago on the Prophecy News Podcast, we told you about Bill Gates creating something called the GERM Team? As it turns out, the GERM Team is part of a larger deal involving the World Health Organization that includes a…wait for it…global pandemic treaty. What power does this give to Bill Gates and the organization that he is the largest single donor of, the World Health Organization? It allows them to fully implement the end times government of Antichrist. I make this statement without a trace of irony or hyperbole.

But now monkeypox seems to be spreading like wildfire.

On May 7th, the very first case in the western world in 2022 was confirmed in the United Kingdom.

Now here we are less than two weeks later and there are now dozens of confirmed and suspected cases in twelve different countries outside of Africa. 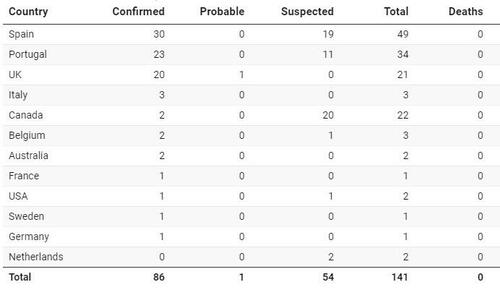 Yesterday, I discussed the cases that have popped up in Spain, Portugal and the United States.  Now there are significantly more nations that are reporting confirmed or suspected cases, and that should greatly alarm all of us. 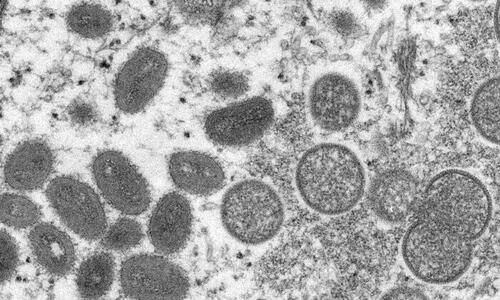 The confirmed case in Massachusetts involves a man that had recently traveled to Canada, and so it was suspected that there were additional cases among the Canadians.

Earlier today, we learned that “thirteen probable cases are being investigated in Canada”, and the test results for those thirteen “probable cases” should be released soon.

Meanwhile, a case has been confirmed all the way up in Sweden…

‘One person in the Stockholm region has been confirmed to be infected with monkeypox,’ Sweden’s Public Health Agency said in a statement.

The infected person ‘is not seriously ill, but has been given care,’ according to the agency.

And it appears that there could be multiple cases in Italy…

Italy’s patient was holidaying in the Canary Islands and is now in isolation at the Spallanzani hospital in Rome, the hospital said.

Another two other suspected cases are being monitored, it added.

The first case of monkeypox in Australia has been confirmed in the state of Victoria from a man in his 30s who recently returned from the United Kingdom.

“There are few close contacts that have been identified, obviously the GP is one of them,” Victoria Chief Health Officer (CHO) Brett Sutton told reporters on Friday, referring to the general practitioner who referred the man for testing.

The Seven Bowls of God’s Wrath

16 Then I heard a loud voice from the temple saying to the seven angels, “Go, pour out the seven bowls of God’s wrath on the earth.”

2 The first angel went and poured out his bowl on the land, and ugly, festering sores broke out on the people who had the mark of the beast and worshiped its image.

3 The second angel poured out his bowl on the sea, and it turned into blood like that of a dead person, and every living thing in the sea died.

4 The third angel poured out his bowl on the rivers and springs of water, and they became blood. 5 Then I heard the angel in charge of the waters say:

“You are just in these judgments, O Holy One,
you who are and who were;
6 for they have shed the blood of your holy people and your prophets,
and you have given them blood to drink as they deserve.”

7 And I heard the altar respond:

“Yes, Lord God Almighty,
true and just are your judgments.”

8 The fourth angel poured out his bowl on the sun, and the sun was allowed to scorch people with fire. 9 They were seared by the intense heat and they cursed the name of God, who had control over these plagues, but they refused to repent and glorify him.

10 The fifth angel poured out his bowl on the throne of the beast, and its kingdom was plunged into darkness. People gnawed their tongues in agony 11 and cursed the God of heaven because of their pains and their sores, but they refused to repent of what they had done.

15 “Look, I come like a thief! Blessed is the one who stays awake and remains clothed, so as not to go naked and be shamefully exposed.”

16 Then they gathered the kings together to the place that in Hebrew is called Armageddon.

17 The seventh angel poured out his bowl into the air, and out of the temple came a loud voice from the throne, saying, “It is done!” 18 Then there came flashes of lightning, rumblings, peals of thunder and a severe earthquake. No earthquake like it has ever occurred since mankind has been on earth, so tremendous was the quake. 19 The great city split into three parts, and the cities of the nations collapsed. God remembered Babylon the Great and gave her the cup filled with the wine of the fury of his wrath. 20 Every island fled away and the mountains could not be found. 21 From the sky huge hailstones, each weighing about a hundred pounds,[a] fell on people. And they cursed God on account of the plague of hail, because the plague was so terrible.