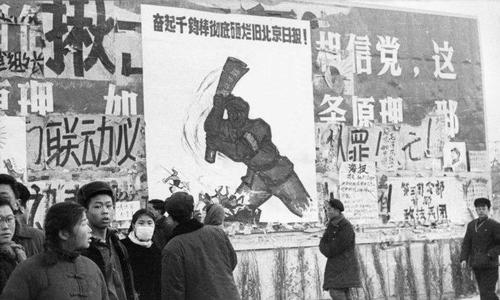 Commentary authored by Chris Talgo via The Epoch Times (emphasis ours), ZeroHedge

From 1966 to 1976, Chinese society suffered under what we now call the Cultural Revolution.

In 1971, The New York Times described the campaign thusly:

“One of the early objectives of the Cultural Revolution in China … was to wipe out the ‘four olds’—old things, old ideas, old customs and old habits.

“The ‘four olds’ had already suffered setbacks in the years of Communist rule preceding the Cultural Revolution, but the Maoist leadership tried to use the new revolutionary upsurge launched in 1966 to eliminate them completely.

Tragically, it seems as if the United States is in the midst of its own Cultural Revolution.

Like the Chinese Cultural Revolution, the current “revolution” in America is being waged by the youth, at the behest of radical leftists, of course.

Also, much like the Chinese Cultural Revolution of the 1960s, the American “Woke Revolution” is hellbent on destroying any and all vestiges of traditional society, especially those that celebrate freedom, individualism, and American exceptionalism, in general.

In China, during the Cultural Revolution, as The New York Times describes, old things, old ideas, old customs, and old habits had to be eliminated.

In America, during the Woke Revolution, we’re following the same path.

Old things, such as fossil fuels, the Founding Fathers, the Electoral College, etc. must go.

Old ideas, such as equality of opportunity and meritocracy, are now moot.

Old customs, such as standing for the National Anthem and vigorously defending one’s right to freedom of speech, are long gone.

And, old habits, such as the Protestant work ethic and rugged individualism, have been seriously undermined.

In place of these “old” aspects of our culture, the Woke Revolution desires to turn our society on its head.

Individualism is being replaced with communalism. Equity, better known as equality of outcome, now trumps equality of opportunity.

Sadly, even Martin Luther King Jr.’s “dream” of a color-blind society has given way to critical race theory, which is the epitome of racism.

And, above all else, class warfare reigns supreme. Rich versus poor. Privileged versus oppressed.

Perhaps most disconcerting when one compares the Cultural Revolution to contemporary America is the disdain for the past.

In China, this manifested in mass book burnings and wanton destruction of historic monuments. That sounds a lot like what’s been happening in America recently.

The parallels between China’s Cultural Revolution and America’s Woke Revolution are becoming closer by the day.

As The New York Times article chronicling China’s Cultural Revolution concluded, “A new generation has appeared, and though much of the old China is too indelible to erase as yet, a new China with ways quite different from the old is in existence.”

The same could be said about America in 2021.

Chris Talgo is senior editor at The Heartland Institute.

Loading...
"Not by might, nor by power, but by my spirit, saith the Lord of hosts." Zechariah 4:6
BEFORE IT'S NEWS ON TELEGRAM
GET THE TELEGRAM APP - https://telegram.org/ JOIN OUR CHANNEL - https://t.me/BeforeitsNews
Read it..
BEFORE IT'S NEWS
SIGN UP FOR OUR NEWSLETTER
Today's Top Stories
New ShariRaye: Trump Soon! Liquifying People! Trump Won! Get Over It!
Juan O Savin - Entering The Final Lap! - Must Video
Former Navy Seal Michael Jaco Major Intel Update (Video)
Unbelievable Turn Of Events! Biden’s Done! Democrats Just Destroyed Everything In 2 Shocking Errors!
New Dark Outpost: Wow...Something's Coming!
New Cirsten W: Arrests & Tribunals! Ambassador Susan Rice! Gavin Newsom Indicted!
Mel K & David Nino Rodriguez Patriot News Update, Summers Getting Hotter Folks, Buckle Up 7-21-2021! - Must Video
Special Restored Republic Update! - Judy Byington - Must Video
Cell phones will be nation wide tested by the government for emergency takeover
US Military Treason Confirmed! Dr. Foul-Xi Stopped Dead In His Tracks By A GOP Warrior! +News - Must Video
Loading...
Featured
COVID-19 & COVID-19 Shot Therapy - They Don't Want You to Find
Have We Reached "Peak Self-Glorifying Billionaire"?
If This Isn't Seen It's Game Over! New Enemy Of The State Rises and You Need To Protect Yourself ASAP!
X22Report: Sen. Rand Paul Is On The Hunt! Deep State Being Hit From All Sides! Next Phase Will Bring Justice! - Must Video
Rand Paul Calls For Criminal DOJ Investigation Into Fauci For Lying To Congress - Says He Will Be Submitting Criminal Complaint
mRNA Technology Inventor Robert W. Malone Warned He May Be Assassinated For Cautioning About Experimental COVID Injection
Science Paper Documents “Self-Assembled Magnetic Nanosystems” For Cybernetic Biocircuitry Interface & Control Systems In Humans, Including “DNA Hydrogel” Tech
The State of Our Nation: Still Divided, Enslaved & Locked Down
Biden To Use Foreign Troops on U.S. Soil? Officials Call For Election Re-do, FBI Corruption & More
Special Restored Republic Update! - Judy Byington - Must Video
Top Global
COVID-19 & COVID-19 Shot Therapy - They Don't Want You to Find
Ein Video, das man ruhig mal seinen Kindern vorspielen darf.... 😁
Keeping their spirits up by singing the national anthem and chanting U.S.A., U.S.A.!
"The Biggest Human PsyOp Of All Time! Its All a Huge Scam!" Bombshell Stew Peters & Del Bigtree Interview!
Holding The World To Ransom! Must See Video By TheCrowhouse!
India Calls for Dialogue With China Over Border Tensions
Iranian Navy Increases its International Presence
“Olympic Spirit” Failed to Unite South Korea-Japan Against North Korea-China
Incredible Evidence - Adrenochrome Is Harvested from Children In Shut Down Military Bases
China Committed An Act Of War On America In The Election! - Mike Lindell - Bannon's War Room
Loading...
Top Alternative
COVID-19 & COVID-19 Shot Therapy - They Don't Want You to Find
Skyrocket: CDC Quietly Doubles Admitted Number Of Received Death Reports To VAERS For C19 Vax? - Must Video
Power Moves Coming! - The Champ David Nino Rodriguez Must Video
The Bible Scientific - Ecclesiastes 1:7
Keeping their spirits up by singing the national anthem and chanting U.S.A., U.S.A.!
NTEB Radio Bible Study: Some of the Greatest Prophecies of the Prophet Isaiah Are Right Now on Deck and Awaiting Their Soon Fulfillment
We are our own worst enemies!
7/21/21: Doctor Fauci – The Fauci Follies
Q Anon! Black Awakening! Jewel DNA! Trans-Humanism! - McAllister TV
Australia warns people not to talk to anyone you might know or be friends with: Links 1, July 20, 2021