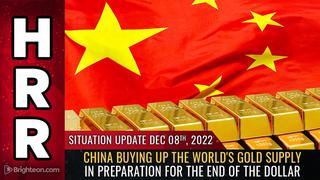 (Natural News) Central banks all over the world are accumulating gold reserves at a record pace not seen in 55 years.

According to the World Gold Council (WGC), central banks all over the world purchased a record-breaking 399 tons of bullion during the third quarter of 2022, massively raising the global demand for precious metals.

The WGC also noted that retail demand by jewelers and buyers of gold bars and coins was also strong, with the world’s demand for gold during the third quarter amounting to 1,181 tons. This amounts to a 28 percent year-over-year increase in demand. (Related: Health Ranger Report: Gold and silver can help safeguard your assets as COLLAPSE of traditional pension systems looms.)

While demand for physical gold assets like bars and coins increased, demand for exchange-traded funds (ETFs) storing bullion for investors shrank. Physical assets, especially precious metals, are typically seen as safe investments during times of economic uncertainty or turmoil. But as central bank-mandated interest rate hikes continue, investors are seeing ETFs as less valuable and are trading them in for other assets.

The WGC noted that a substantial amount of the gold purchased during the third quarter was bought by central banks that did not publicly report their purchases. The central banks of Turkey, Uzbekistan, Qatar and India were among the largest buyers.

The Central Bank of the Republic of Turkey purchased 31 tons, bringing its total gold reserves to 489 tons. This does not include the 46.8 tons of gold bars and coins retailers purchased – a more than 300 percent year-over-year increase in gold purchases in the country.

The Central Bank of Uzbekistan was next, purchasing 26 tons. The Reserve Bank of India followed with 17 tons, pushing its reserves to 785 tons, and the Qatar Central Bank purchased 15 tons of gold.

Just under a quarter of all gold purchases for the third quarter went to the central banks mentioned above and other publicly identified institutions. The rest went to mystery buyers.

The People’s Bank of China rarely discloses how much gold it is buying or how much is currently in its reserves. But trade data shows that the country has been importing vast amounts of bullion. Last year, it imported 821 tons of gold. This year, it has imported 902 tons so far, already surpassing the 2021 total.

The gold that China imports is also on top of the more than 300 tons the country’s gold mines typically produces each year.

Russia, the world’s second-largest gold mining nation, typically produces more than 300 tons of gold per year. But since the beginning of Russia’s special military operation in Ukraine, Russian gold is no longer welcome in many parts of the world. Sanctions have also made countries like China and India more cautious about importing huge quantities of Russian gold.

This has raised speculation about whether or not the Central Bank of Russia stepped in to purchase more gold. The country’s foreign currency reserves held by non-Russian banks and financial institutions are currently frozen by sanctions, making it less attractive for the central bank to make more currency purchases.

Other possible major buyers include Saudi Arabia and the Gulf states of Kuwait and the United Arab Emirates. All three nations have reaped massive windfalls as demand for oil surged, and financial analysts believe they have been plowing cash into foreign assets, possibly in gold to diversify their holdings.

Watch this clip from InfoWars discussing how many countries are quietly moving back to the gold standard.

This video is from the InfoWars channel on Brighteon.com.