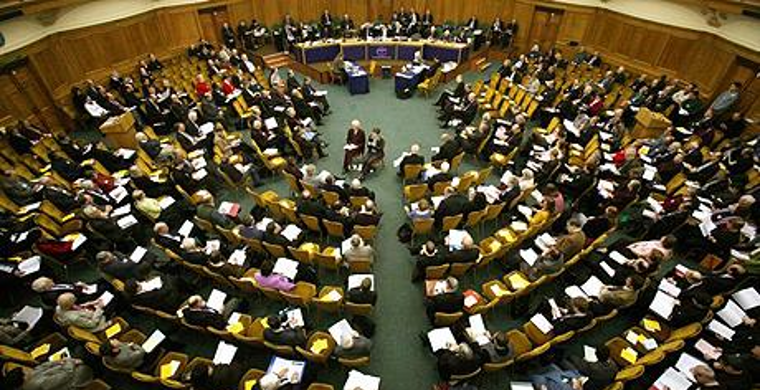 The Save the Parish campaign was out in force with both Marcus Walker and Prudence Dailey wasting no time to be an effective presence on the floor unapologetically standing up for the Parish System. They have made waves. Much of the Archbishop’s opening addresses spoke directly to the campaigns concerns. There were many voices that spoke up on these issues and every other hot-button issue.

Then came the presentation on Governance. Suddenly the chamber emptied and the tea-room filled (I’m being hyperbolic — but a number of members left at the beginning of the presentation). We heard how the church’s national bodies were to be merged. That we all (Synod and other stakeholders) needed to be selfless, while those at the centre should accumulate more power and responsibility. We were told how currently there is too wide a distribution of power and resources which makes accountability difficult. Though I wonder if the Bishop could point to one example of where the centralisation of power has led to more accountability?

Then we were told that we needed to change synod. Apparently democracy is not delivering the level of diversity into national church appointments which is desired. Therefore democracy must be ‘reformed’ and an appointments body set up to audit democratically elected synod members for their suitability. I am only touching the surface of what was discussed — the accompanying paper being over 50 pages long. Needless to say my jaw was on the floor by the end of the presentation.

I expected a large number of challenging speakers to stand up as they had for all the smoke-bomb issues. Yet they did not. That is not a criticism of anyone who spoke in the earlier sessions and it may well be that they are waiting to speak at a future synod. But I am worried. Because Governance is really boring, it is never a hot button issue by virtue of how dull it is. My worry is that while we are all tearing lumps out of each other over Living in Love and Faith and Saving the Parish, that a worrying centralisation and undermining of Synod’s democracy may simply happen in the background — without facing serious scrutiny.

In the run up to the first lockdown in England a week before churches were legally required to close the Archbishop volunteered to shut us all down when the Government asked for non-essential businesses to close. Even an atheist society tweeted that they were glad if shocked that the Archbishop agreed with them on the non-essentiality of the Church. Then we ceased to hear (and I say this as a churchwarden) from the central church for months. We were on the front lines, working tirelessly to support our Parish community, on our own for months. Now the Archbishop has apologised for how he handled things and I believe we should forgive someone when they apologize. But for the central church which so badly failed us during the pandemic to now ask us for considerably more power is beyond the pale.

It is my great hope that the Synod members and everyone involved in oversight and administration of the Church of England not be distracted by the smoke bombs of LLF (Peter Ould has already shown how no change can happen because of the democratic make up of the Synod) and other hot button but unfruitful debates. Rather let us focus on holding these governance proposals to account so that we don’t one day return to our Parishes feeling as though the bank has been robbed.

Luke Appleton is a General Synod Member in the House of Laity for Exeter Diocese.

I have just come back from the opening session of the eleventh General Synod and I am reminded of a saying that I have heard a few of our American friends say: that if there are smoke bombs going off in the post office, then it is the bank that’s being robbed.

And Synod had some smoke bombs. Firstly it had the hijacking of an important statement and clarification on the Ghana issue by a handful of protestors who abruptly stood up for what may have been a good twitter photo opportunity but was met almost with a sigh in the chamber. Thankfully those actually engaging with the process like adults were able to get a useful clarification from the Archbishop of Canterbury. Then it had a motion on calling on the Government to end inequality. Did it draw on the CofE’s vast network of foodbanks and community relief efforts to suggest tangible changes the Government could make to reduce inequality? No. Just a call for someone else to make the problem go away. It was the theological equivalent of angry man shakes fist at cloud.