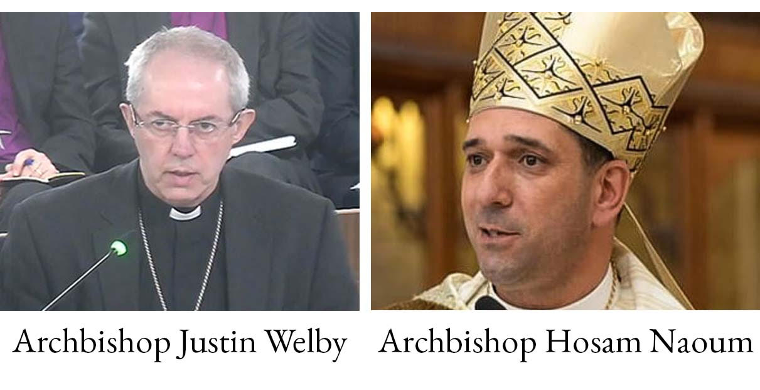 It is a charge that has no basis in fact and will only cause continued harm to Christians in the Middle East who experience persecution not from extremist fringe Jewish groups but from Arab Islamists who want nothing more than to rid the Middle East of any Christian presence.

His latest detonation came in an article written jointly by himself and the Archbishop of Jerusalem, Hosam Naoum, warning about a crisis of Christian survival “in the Holy Land”. It appeared in the Sunday Times.

They said it was being brought about through the desecration of churches and attacks, both physical and verbal, on priests, monks and worshippers. Franciscan friar Francesco Patton, guardian of the Christian holy sites in the region, made a similar claim in the Telegraph where he wrote that, in recent years, the lives of many Christians had been made unbearable “by radical local groups with extremist ideologies”.

The previous week, Naoum claimed on Britain’s GB news channel that Christianity was on the point of extinction in the Holy Land as a result of pressure from “extremists and radicals,” especially in Jerusalem.

The Greek Orthodox Patriarch of Jerusalem, Theophilos III, said that “at no time in human history has the future of our Christian communities been shakier,” adding that “radical groups are intent on uprooting us from our homes, businesses and ritual sites”.

Who exactly are these “radical local groups” no one would say, but the inference is obvious; blame the Jews! Since Israel is a Jewish state, this suggested that those responsible were Jews. How original.

Open Doors a non-denominational mission supporting persecuted Christians in the world, repudiated the idea, as did Melanie Phillips a British Jewish writer whose columns appear in the Times, the Jerusalem Post and other venues. She took the archbishop to task, soundly smacking him over the head for his allegations.

Clearly stung by the charges, Welby sought to deflect the growing outrage over his article by writing a postscript on the

Israel is the only democracy in the Middle East. Two million Arabs live in Israel. Arabs who hold Israeli citizenship are entitled to vote for the Israeli Knesset. Arab Knesset members have served in office since the First Knesset. What they cannot do is form a political party that rejects Zionism.

Melanie Phillips accused Welby of waging a Christmas crusade: scapegoating the Jews. “Archbishop Welby is now twisting in a foul and bitter wind,” she wrote.

With his endless gaffes and apologies ranging from false allegations of homophobia and prostrating himself in India before some ancient battle, he is remarkably silent about the most corrupt province in the Anglican Communion – The Church of South India. (VOL has written some 20 stories detailing the corruption.)

Now he is up to his neck in a political uproar that offends millions of western evangelicals who support the state of Israel, including several million Anglicans! Western liberal protestants, including the Episcopal Church, deep down hate the state of Israel and would not be unhappy to see it dissolved in favor of a “free” Palestinian state. If that were to happen, it would be the end of Christianity in Israel.

Welby is scapegoating Jews for crimes against Christianity perpetrated by others, a fundamental myth that has been fueling Christian antisemitism from the time of the early church fathers.

According to Israel’s Central Bureau of Statistics, the country’s Christian population actually increased last year by 1.4 per cent. Indeed, Israel is the only place in the Middle East where Christians are flourishing! Christians are systematically being persecuted and slaughtered in Pakistan, India, Yemen, Iran and Syria to name but a few countries. In Iraq, Christianity has been virtually wiped out by Islamist attacks!

Open Doors listed ten countries where Christians are most persecuted. They include North Korea, Afghanistan, Somalia, Libya, Pakistan, Eritrea, Yemen, Iran, Nigeria and India. More than 50 countries are on its full list, all were in the developing world. None of them was Israel.

The Christian charity explicitly attributed the steep decline of Christians in the area to “Islamic oppression,” explaining that “Islamic extremist militants” in the Palestinian Authority-administered “West Bank” were causing Christians to fear violent attacks.

In Gaza, where Hamas holds political sway, and whose pathological hatred of Jews and the Israeli state, results in the firing of rockets into Israel from time to time, once boasted 5,000 Christians living there. It now has fewer than 1,000 Christians. After Hamas seized control, its affiliates began targeting Christians with kidnappings, murders, forced conversions and attacks on churches and Christian-owned businesses. One never hears anything about this from Episcopal Presiding Bishop Michael Curry, who regularly condemns Israel for “causing death, life-changing injury and destruction of property and lives and violence borne of frustration, rooted in injustice…” while conveniently overlooking rockets being fired on innocent Jewish families in Israeli territory.

The president of the Board of Deputies of British Jews, Marie van der Zyl in a protest letter to Welby, asked about the archbishops’ reference to the original Christmas story that took place against “the backdrop of a genocide of infants” — an allusion to King Herod’s massacre of children in the Gospel of Matthew.

“I found this reference troubling,” she wrote, “because of the potential linkage which could be made between Christianity, Jews and the killing of children in any current context”. You can read her full letter here: https://virtueonline.org/british-jews-condemn-welby-comments-holy-land-persecution-christians

Phillips readily admits that the churches do have valid cause for complaint over attacks carried out against them recently by Jewish extremists. “These are totally reprehensible, and Israel should be cracking down on such groups. But to claim that these limited instances of fringe Jewish hooliganism constitute a systemic threat to Christian existence in Jerusalem is a gross distortion that hides the reality.”

Now we await yet another apology from Welby, scapegoating Jews. It’s something he is really good at; but his leadership of the Anglican Communion is now nothing short of a joke. His resignation would be most welcome.

Justin Welby, the Archbishop of Canterbury, has once again got it all wrong and may well have to apologize for the umpteenth time.

This time, it is his blast at Israel over allegations that unnamed “radical groups with extremist ideologies” are persecuting Christians causing untold harm to the faithful, forcing them to flee. If the persecution continues, it will result in Christianity being wiped out in the land of Christ’s birth.