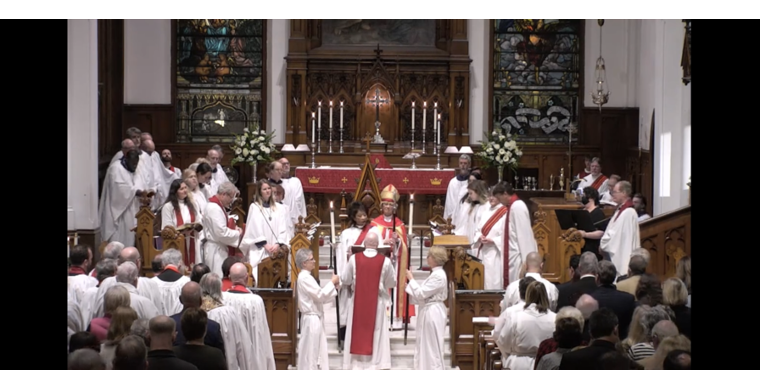 Eighteen years ago, Dean Paul Zahl flew a black flag to protest the ordination of a partnered homosexual as bishop of New Hampshire. Since then, the cathedral has been embroiled in a long-standing fight with its bishops, with its most recent dean, Andrew Pearson resigning over unresolved tensions with the Episcopal Church.

The Advent Dean said he planned to start a congregation affiliated with the Anglican Church in North America.

“After 30 years of straddling through all of these issues, the Advent has made a fairly definitive decision to be an Episcopal Church full-stop,” said Pearson. The pressure on Advent to conform was too much, he said.

“Today, December 7th, the Cathedral Church of the Advent hosted and participated in the ordination of a partnered homosexual as a priest. The cathedral choir provided the music, along with two staff organists. Cathedral Deacon Katherine Jacob was the gospeller. Interim Dean, Canon Craig Smalley, participated in laying hands on the ordinand. In a generation, that which was once protested is now sanctioned.”

Prior to his leaving, Dean Andrew Pearson refused to schedule the ordination at the Advent. The reasons for his refusal were known to the Advent’s senior leadership. Upon his departure, the objection was seemingly dropped.

Towards the end of Dean Frank Limehouse’s ministry, ordinations were few at the Cathedral. During the tenure of Pearson as Dean, they ceased. Though nothing was stated publicly, there seemed to be a generosity from Bishop Kee Sloan to not force the issue of ordaining individuals the Cathedral would object to, at the Cathedral. In an effort to normalize relations between the Cathedral and the Diocese of Alabama, Bishop Glenda Curry moved ordinations back to the Cathedral.

It was also noted that the Reverends Rich Webster and Huey Gardner participated in the service as well. They are the rectors of large churches (St. Luke’s, Mountain Brook and St. Mary’s, Birmingham, respectively) that formerly opposed the direction of the Episcopal Church as well.

Bishop Curry has done a masterful job of bringing a unified front to the Diocese of Alabama, said a diocesan press release, but the cost is the gospel witness and the end of a once powerful force and voice for the gospel in Birmingham. The spiritual end of the diocese is now written in stone.

BIRMINGHAM, AL: Cathedral Church of the Advent Ordains Practicing Homosexual
After thirty years at war with the diocese, the cathedral succumbs to a woman bishop’s will

In what many will view as a complete break with its evangelical past and identity, progressive Episcopal Bishop Glenda S. Curry, led worshippers at the Cathedral Church of the Advent in ordaining a practicing homosexual to the priesthood in a highly attended, colorful, liturgical service.

Jose Fernandez was one of four priests ordained at the formerly evangelical cathedral, while his “husband” Kevin Fouts was one of his presenters. The Rev. Canon R. Craig Smalley, Interim Dean and Rector of Advent knew of the priest’s sexual orientation and said nothing.

Curry is the 12th Bishop of the Episcopal Diocese of Alabama and the first woman bishop of the diocese. She was consecrated as bishop coadjutor on June 27, 2020. The cathedral has had a long and strong evangelical witness in Birmingham.