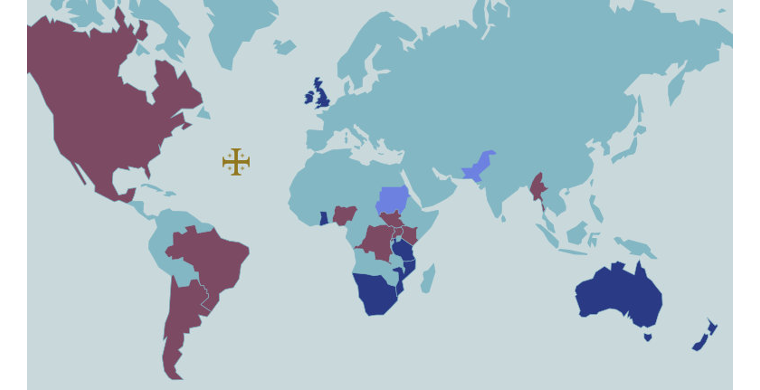 GAFCON. Dioceses formed in New Zealand and Australia offer hope for faithful Anglicans down under. They will grow and thrive in the coming years and are growing against all the odds. There are slivers of hope for Ireland, Wales, Scotland and, in time, England even as their national churches decline. Other GAFCON initiatives include Caminemos Juntos (Let’s Walk Together), an Anglican Latino network and church planting movement in South, Central, and North America, begun in 2010. The GAFCON Lawyers Network, led by Dr Robert Tong, has developed valuable skills and expertise in establishing legal structures to help faithful Anglicans remain within our global Anglican fellowship. Anglican Missions Africa is an indigenous Anglican mission established after the GAFCON 2018 Jerusalem conference. They run Healthy Church training and are very active in evangelism and church planting. For more GAFCON initiatives go here: https://www.gafcon.org/news

ACNA. The birth and steady growth of the ACNA over a decade of denominational decline and upheaval cannot be anything but an achievement. While recent numbers have levelled off, the ACNA has been a marvelous spiritual hospital for the spiritually wounded and a more permanent spiritual home for tens of thousands of former Episcopalians, clergy and bishops who have been marginalized by a woke denomination bent on destroying the last vestiges of orthodoxy. A new generation of North American Anglicans unshackled from TEC will be ACNA’s future. https://anglicanchurch.net/

AMERICAN ANGLICAN COUNCIL. Few ministries have had such an enormous impact on North American Anglicanism as the AAC. Since 1996, they have been bringing much needed reform and renewal to Biblically faithful Anglicans in North America. Led by Canon Phil Ashey, this multifaceted ministry offers resources to revitalize local congregations and dioceses, expertise through its Anglican Legal Society members to help in practical legal and governance matters throughout the ACNA, leadership development conferences and small groups for clergy at every level of the church, a vibrant news service and much more. The Rev. Canon Mark Eldredge is a specialist in the revitalization and renewal of churches. The AAC also has a Bishops Leadership Academy (BLA) with retreats for ACNA bishops. This allows presentations, facilitated conversations, and discussions for new bishops on the issues of the day, as well as a globally focused Bishops Leadership Summit (BLS) that develops diocesan mission partnerships between ACNA Bishops and GAFCON and Global South Bishops. https://americananglican.org/

ANGLICAN RELIEF AND DEVELOPMENT (ARDF). The ARDF is the social outreach arm of the ACNA. Its model is Assess, Partner and Transform. Through ARDF, leaders are empowered to work with Anglican Churches around the globe. Dollars go to projects that have been desired, developed, and designed by the local community. Every project proposal undergoes thorough research by an independent third-party to ensure that it will be effective and sustainable over the long term. https://ardf.org/

SOCIETY OF ANGLICAN MISSIONARIES AND SENDERS, (SAMS) is a missionary sending community, building relationships with the worldwide church to experience the broken restored, the wounded healed, the hungry fed, and the lost found through the love and power of Jesus Christ. SAMS began over 40 years ago as a direct response to Christ’s Great Commandment and Great Commission. They are an Anglican missionary organization that serves as a support short-term and long-term missionary. They partner with Anglican and Episcopal churches to grow the Kingdom of God globally. SAMS supports over 100 missionaries in their journeys to share Gospel hope through the Anglican tradition. https://samsusa.org/

ANGLICAN HOUSE PUBLISHERS is a startup publishing business that has arisen to serve the needs of orthodox Anglicans, particularly in North America. Anglican House has established its role as publishers of the 2019 ACNA Book of Common Prayer, in different formats and with various supporting liturgical materials. Anglican House has also published many Anglican authors who were previously closed out of Episcopal outfits. The “Zoom Memoirs” of Bishop John Rodgers spans the life of one of the key leaders in the formation of Trinity School for Ministry. The Anglican Network in Canada brings together essays from Jim Packer and Canadian authors about how the “Essentials” movement in Canada became an integral part of the ACNA. Anglican House is bringing out a series of short studies on “Knowing Anglicanism.” It has also published The Nicene Creed for Kids in English and Spanish. https://anglicanhousepublishers.org/

THE CENTER FOR REFORMATION ANGLICANISM is owned by the Rev. Chuck Collins. The Center is lead by a diverse group of ministers across the Anglican Communion. Collins has written extensively on Reformation Anglicanism and is published in numerous journals and magazines. He is the author of Cranmer’s Church: Introducing the Episcopal Church & Anglicanism in America, Reformation Anglicanism: Biblical, Generous, Beautiful (2015). He, along with Cranmer scholar Dr. Ashley Null offer the strongest defense of Reform Anglicanism in the Anglican Communion today. https://www.anglicanism.info/

EKKLESIA is the global Anglican ministry of Bishop Bill Atwood. Ekklesia fosters relationships among leaders in the Global South and churches still aligned with orthodox theology and practice in North America and serves as a catalyst for many development projects. Faithful leaders in Africa, South America, and Asia have partnered with Ekklesia. While much of his work is under the radar and under reported, Bishop Atwood’s ministry behind the scenes among Global South archbishops and bishops is without peer. His knowledge of who are the good and bad players is of inestimable value. https://www.ekk.org/our-story

LEADERWORKS is the ministry of the Rev. David Roseberry and his team. They help church leaders do their work by providing resources, coaching, and leadership services. They help hundreds of churches in the Anglican Church in North America by providing effective online stewardship and generosity programs. THE EVERGREEN PROJECT highlights successful stewardship program. https://leaderworks.org/

CONTINUING ANGLICANS. Since 1977 they have kept the faith in the Anglo-Catholic and High Church Anglican tradition. While fragmented, they have, in recent years, begun to come together. They recently went from G4 (the four largest Continuing jurisdictions) to G3 in an effort to merge and solidify their ministries, as more unites than divides them. Watch for the leadership of Mark Haverland to emerge as the archbishop and metropolitan of the Anglican Catholic Church, a leading G3 Continuer. https://www.continuinganglicanchurch.org/

SOME ANGLICAN SCHOLARS to watch in 2022 are Os Guinness and Gerry McDermott (to name just two), who will continue to provide the sociological, historical and theological framework necessary for North American Anglicanism to thrive. Both are prolific authors whose books are must reads. I am reviewing as many as I can for VOL’s readers.

MISSIONARIES AT WORK. Little spoken about, and with even less publicity, are the discipleship endeavors of many missionaries like Jerry and Stacy. They have boots on the ground in the Middle East and Africa, discipling and church planting. They recently added two more churches in Iran, with a new church in their holiest city as well. They report growing numbers of baptisms in Iraq. You can view their website here: www.lovefortheleast.org

JURISDICTION OF THE ARMED FORCES AND CHAPLAINCY. The Jurisdiction of the Armed Forces and Chaplaincy is the canonical residence for all chaplains requiring professional ecclesiastical endorsement for the Anglican Church in North America, for the Church of Nigeria North American Mission (CONNAM), and some continuing Anglican groups with loose connection to the world-wide Anglican Communion. The founding bishop and first bishop of the JAFC is Derek Jones. He is a bishop of the Church of Nigeria (Anglican Communion) and the ACNA.

IN CANADA, the ANiC is a continent-wide family of churches, and a diocese in the ACNA. A new book, SURVIVORS ON THE BORDER: Protest, Providence, and Promise in Global Anglican Realignment (Anglican House Publishing, 2021) will soon be available to readers. As the Anglican Church of Canada fades, watch as the growth of the Anglican Network in Canada continues. https://www.anglicannetwork.ca/

IN MEXICO, The ACNA has a growing footprint with ten congregations in that country, including two mission churches in Guatemala, and a missionary diocese in Cuba. https://anglicanchurch.net/caminemos-juntos-first-ordination-and-fourth-conference-in-mexico/

IN HAITI, The Anglican Diocese of the Living Word, (ADLW) a diocese in the ACNA, has 9 mission congregations in that country and growing. https://www.adlw.org/

While many believe the Church in all its myriad forms is failing, indeed flailing with the rise of Nones capturing much media attention, God is not asleep at the wheel of His Church. Anglicans in North America while numerically small, have a clear fix on the gospel and they walk between the Scylla of a dying mainline Protestantism and the Charybdis of Roman Catholicism. The ACNA has captured the attention of a number of notable persons including Mike Pence, John Kasich and, more recently, Beth Moore. There is no end to what the ACNA can achieve in the coming years with God’s help. At a global level GAFCON has more Anglican parishioners than the Lambeth Conference, with the makeup of Anglicanism now solidly black, female and under 30.

It is said, with some justification, that newsmen and newswomen follow bad news like a beagle sniffing for truffles. There is much truth to this.

So, it behooved me to put together a story on the good things being done in our Anglican communion. Here are some things that warrant mention and offer hope in a world that is rapidly falling apart with Covid, multiple variants, political deterioration and a general feeling of hopelessness even as our divisions grow.

ANGLICAN COMMUNION. The communion added two new provinces this past year. The first was the Igreja Anglicana de Mocambique e Angola (Anglican Church of Mozambique and Angola), the second Portuguese-speaking province. The second, and more notable was the formation of the Anglican Province of Alexandria, which united dioceses in North Africa and the Horn of Africa. Both of these provinces are orthodox and may well challenge Archbishop Justin Welby’s leadership as they are closer in spirit to the Global South and GAFCON than the Lambeth Conference. Both were formed to meet the growth of Christianity in Africa, even as Anglicanism continues to decline in the west. https://www.anglicancommunion.org/theology/doctrine.aspx