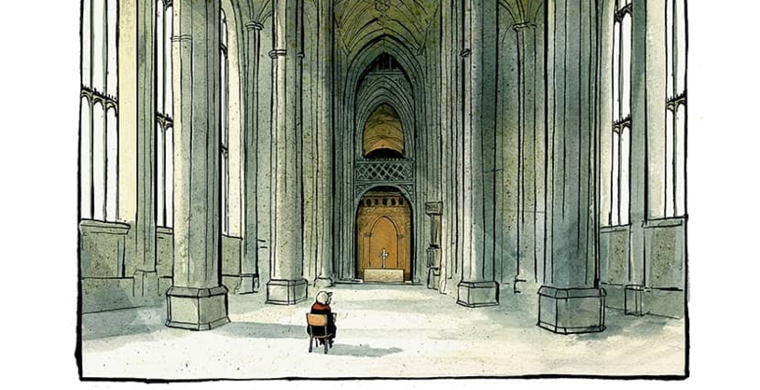 He goes on to besmirch the newish Archbishop of York, Stephen Cottrell for “promoting an uncritical embrace of the evangelical model of mission, with its grim middle-management diagrams and cheery facile slogans. Evangelicalism remains ebullient as ever, but thankfully its reputation for trend-bucking success is now fading: a recent report showed that its latest church-planting efforts were largely fruitless. This makes it easier to put it back in its box.” Oh, the snobbery.

On homosexuality, Hobson says it is time to end the dispute over homosexuality. “It won’t be solved overnight, or over-year, but the solution is clear enough. Diversity must be allowed: liberal parishes must be free to conduct gay weddings, evangelical parishes must be allowed to refuse to. The Church allowed such diversity over the ordination of women; there is no reason that this compromise should not be repeated.”

Hobson’s loose cannon approach to church divisions is pure scattergun — fire enough rounds and you might hit something.

If Hobson thinks liberal Anglo-Catholicism will draw millions of disenfranchised and disenchanted English men and women back into the church, he is smoking ganja. The sight of Justin Welby swimming naked across the Thames River is a better draw card. His condemnation and trivialization of evangelicals is pathetic and plain dead wrong. Welby and Holy Trinity Brompton, the home of ALPHA, is not the only evangelical game in town. The more solid evangelicalism of All Souls, Langham Place, of Christianity Explored and myriad small solid evangelical congregations in the mode of Melvin Tinker, Dr. Peter Sanlon and other evangelical luminaries offer a better hope for unbelievers. Here they would hear an unalloyed gospel that preaches man’s sinfulness before a righteous, holy God who demands repentance and faith. Liberal Anglo-Catholicism offers none of that. That is the religion of Rowan Williams and Giles Fraser — an Anglicanism that saves no one and nothing.

On the subject of homosexuality, Hobson really doesn’t get it. The Church of England’s pansexualists (LBTQI+) especially and including Jayne Ozanne, will never allow a two-tier system to exist. It is all or nothing. To allow any opposition to homosexuality is to hear cries of exclusion, hate, homophobia, “they’re killing us” and fear-mongering to continue. Look at what is happening to anyone upholding reparative therapy for homosexuals. They can be fined or go to jail for daring to express the opinion that voluntary rejection of same sex attraction is acceptable.

Does Hobson think that with Mr. Stephen Knott, a married homosexual who sits at the right hand of Welby to determine the next generation of appointments would allow anyone who opposed the homosexual steam roller to get a job! Who does he think he is kidding?

Is Hobson so insular in his observation that he has not seen what has happened in the US Episcopal Church over the last 20 years with the consecration of the homosexual Gene Robinson to the episcopacy! It led to 100,000 Episcopalians leaving the TEC and forming the Anglican Church in North America! Is he not aware of what happened when Bishop William Love of Albany was given a polite “beloved community” heave-ho by PB Michael Curry because he refused to allow homosexual marriages in his diocese! Or the 700 plus priests who in conscience could not stay in TEC because of TEC’s embrace of homosexuality!

Hobson wants us to believe in the “core strength” that Anglicans can draw on, a “core identity that could stand it in good stead,” but that is just another name for institutionalism.

Hobson believes, the Church of England is liberal in the sense that it affirms the liberal state and rejects a reactionary response to modern culture. It is Anglo-Catholic in the sense that it has confidence in ritual tradition, and is wary of simplistic emotional piety and bossy legalism.

But that was tried under Rowan Williams and it didn’t work. Williams poisoned the well of Lambeth and Global South evangelicalism by pushing homosexuality, in effect creating GAFCON. Hobson’s dig at evangelicals “emotional piety and bossy legalism” is condescending at best and theologically lazy at worst, and will be rejected by authentic evangelicals who believe the Bible’s absolutes about moral behavior. The evangelicals maintain the biblical absolutes cannot be compromised to suit effete, pale, liberal Anglo-Catholics who enjoy smells, bells and tradition.

Divided we stand: Anglicans need to agree to disagree, ran the headline, but that will not work precisely because real evangelicals will never compromise Scripture over homosexual practice and because such compromises have never worked. Calls for tolerance come from the most intolerant, especially from homosexuals.

In the US, whole denominations have experienced schism — the latest being the Reformed Church in America. It has already happened to the United Methodist Church, the Presbyterian Church USA and, of course, the Episcopal Church… and that will be the fate of the Church of England.

Already the Church of England is starting to lose its brightest and best people to Rome, Orthodoxy and GAFCON, and that trajectory will only continue.

In the end, it will be Hobson’s choice: the necessity of accepting one of two or more equally objectionable alternatives. The C of E cannot escape the Procrustean bed of its own making — no gospel, irrelevance, coupled with a pandemic leading to its own demise. This is what York Archbishop Stephen Cottrell described as a “grand operatic death” or the alternative, an evangelical renewal and revival with Scripture grounding it all.

You can read The Spectator piece here: https://www.spectator.co.uk/article/divided-we-stand-anglicans-need-to-agree-to-disagree

British theologian Theo Hobson believes the Church of England’s future can be saved if it can recover its liberal Anglo-Catholicism.

He writes; “It is liberal in the sense that it affirms the liberal state and rejects a reactionary response to modern culture. It is Anglo-Catholic in the sense that it has confidence in ritual tradition, and is wary of simplistic emotional piety and bossy legalism. It prefers mystery, difficulty, open-mindedness. This is, in my humble opinion, the best Christian tradition, and in fact the best tradition in all of human culture. So why does it have all the self-confidence of a pimply teenager?”

Hobson has no use for evangelicals who he says should be treated “with a bit less respect.” He accuses evangelicals, who for decades have “unbalanced the Church by drawing relatively big (and affluent) crowds with a style that grates on most Anglican sensibilities. Its simplistic idea of mission has dominated all recent attempts at innovation, which have been heavily backed by the archbishops, leading to discontent in the parishes.” John Stott would profoundly disagree with that assessment.