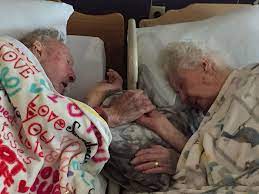 In Britain, it is now official Government policy to ignore the needs of the elderly. Doctors and nurses are told to let old people die – and to withhold treatment which might save their lives. Hospital staff are told to deprive the elderly of food and water so that they die rather than take up hospital beds. Nursing home staff have even been given the right to sedate elderly patients without their knowledge. The only -ism that no one cares about is ageism.

But at what age are patients simply allowed to die? And how old is too old for patients to be resuscitated? At what point does society have the right to say `You’ve lived long enough, now you must die and make way for someone else’? And why should resuscitation be decided by age? It is possible to argue that it would make as much sense to decide according to wealth or beauty. But ageism is now officially accepted. Anyone over 60 is now officially old, though in a growing number of hospitals the cut off age for resuscitation is 50.

We live in a politically correct world but the elderly don’t count – particularly if they are white and English. Report after report after report shows elderly patients being left in pain, in soiled bed clothes. Elderly patients in hospital are ignored by staff and left to starve to death, denied even water if they cannot get out of bed and fetch it themselves.

Old people are a burden which the Government cannot afford and so the politicians will continue to authorise whatever methods are necessary to ensure that the number of burdensome old people is kept to a minimum. The existence of an absurd branch of medicine called geriatrics is used as an excuse to shove old people into backwater wards and to provide them with second-rate medical treatment. In February 2011, an official report condemned the NHS for its `inhumane treatment of elderly patients’ and stated that NHS hospitals were `failing to meet even the most basic standards of care’ for the over-65s. It is no exaggeration to say that the NHS treats the elderly with contempt. (It used to be said that you can judge a civilisation by the way it treats its elderly.)

It was back in February 2005 that it was revealed that the Government had advised that hospital patients with little hope of recovery should be allowed to die because of the cost of keeping them alive. The Labour Government suggested that `old people’ be denied the right to food and water if they fell into a coma or couldn’t speak for themselves. So much for any hope for stroke victims. The Government suggested that the need to cut costs came before the need to preserve the lives of patients and decided it had the right to overturn a right-to-life ruling which had been made when a judge ordered that artificial nutrition and hydration should not be withdrawn unless the life of a patient could be described as `intolerable’. (The judge had added that when there was any doubt, preservation of life should take precedence.)

Of course, depriving the elderly of food and water is sometimes more a consequence of incompetence than official policy. When my mother was in hospital she couldn’t feed herself but the staff didn’t feed her. If no relative could get to the hospital to feed her she didn’t eat. Drinks were put on her tray and then taken away untouched. `Not thirsty, today?’ an idiot would ask merrily.

Meanwhile, the Government pours money into subsidising the lives of the lazy and the work-shy. Healthy 30-year-olds sit around growing chip backsides and beer bellies, slumped in front of their high definition digital television sets watching their choice of State subsidised satellite television, opening the windows to let the heat out because it’s easier than turning down the central heating.

The elderly are classified as the `Unwanted Generation’: a political embarrassment. Elderly individuals facing blindness from age-related macular disease are denied drugs that might have prevented their blindness. The elderly are considered expensive, useless and expendable. The theory is that they don’t contribute and rarely vote and can, therefore, be disregarded. But those who believe this will be old sooner than they think. And the definition of ‘old’ is getting younger by the year.

Wars have taught us that people seem to be prepared to accept as normal all sorts of terrible things. But how unbelievably awful it is that doctors and nurses accept that the elderly (officially the over 60s) must be allowed to die because keeping them alive isn’t cost effective. The official attitude seems to be that old people don’t matter and don’t have rights simply because they are old. In mid August 2007, a Select Committee on Human Rights, comprised of MPs and peers, reported that 21% of hospitals and care homes failed to meet even minimum standards of dignity and privacy for older people. The Committee said it had uncovered evidence of neglect, abuse, discrimination and unfair treatment of frail, older people. (Their discovery came as no surprise to those of us who have been uncovering such abuse for decades.) How have we managed to forget that in the 1930s the Nazis deliberately starved and dehydrated elderly and vulnerable patients because they were regarded as a useless burden on society? That is exactly what we are doing today.

An astonishing (and horrifying) survey conducted among readers of the journals Nursing Standard and Nursing Older People showed that fewer than one in six nurses said that nothing would prevent them from reporting abuse of older people in their care.

In other words five out of six nurses would, at least sometimes, fail to report abuse of the elderly people they were being paid to look after. So, in my view, five out of six of nurses aren’t fit to be nurses.

Would these same nurses ignore the abuse of children so easily?

This is utterly appalling and an indictment of the modern nursing profession.

The same survey showed that six out of ten nurses would turn a blind eye to the abuse of the elderly. They would say nothing if they knew that an elderly patient or care home resident was being beaten, bullied or robbed.

Why are nurses failing their patients?

One reason is cowardice.

Unbelievably, it seems that nurses are frightened to report abuse in case they themselves are abused by the person doing the abuse.

Another reason is, apparently, `fear of misinterpreting the situation’.

What sort of political correct garbage is that?

How can anyone `misinterpret’ any of that?

Can it be because too many modern nurses are lazy, stupid and incompetent? Is it because too many are far too self-important to do anything other than stare at a computer screen all day long?

In my view, nurses who say nothing when they see abuse are as guilty as the abusers. A once great profession is, today, in a worse state than it was in the days of Dickens. Is it so very old-fashioned of me to believe that every nurse should always report every incident of abuse? Always. Without exception.

Ageism is, it seems, now endemic in health care. A reader wrote to tell me that when she visited her doctor complaining of painful knees her doctor told her, very abruptly, that her problem was that she was living too long. She was devastated. `It wasn’t said as a joke,’ she told me. `He meant it.’ In the months before he died my father repeatedly complained: `People treat me like a fool because I am old’. A 79-year-old reader told me: `If you are over 55 they want you dead because you’re too expensive alive.’

We now live in a world where it is considered acceptable for men and women to have to share a ward; where hospital bathrooms are so dirty that patients dare not use them; where dentists are so scarce and expensive that people have to resort to pulling their own bad teeth with the aid of a length of string tied to a doorknob. But it is the elderly who, above all others, are regarded as disposable and irrelevant. It is the elderly who have no rights. Sexism and racism are outlawed but ageism is not. Indeed, it seems clear that ageism is now a State sponsored prejudice. Violent, feral youths who are caught assaulting elderly law-abiding citizens are likely to be ‘punished’ with a fistful of vouchers entitling them to a handful of free CDs (the lyrics of which may well encourage more violence) but honest, elderly citizens who, cannot afford to pay their council tax bill will end up in prison.

When doctors are owned by the Government then the Government’s priorities take over. And so the elderly, who are regarded as an expensive burden, are considered expendable.