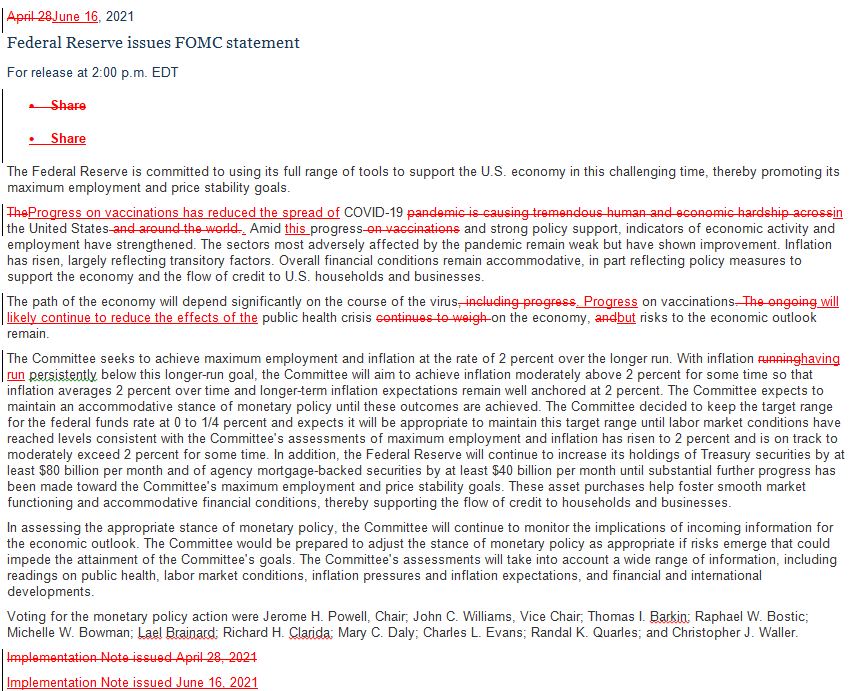 Rates are going up.

Finally it’s not a matter of if, but when and that makes a lot of difference for a market that was not even pricing in if.  As you can see from the statement, only very minor changes were made with the key change being “inflation running persistently below” to “inflation having run persistantly below”.  Even the Fed don’t want to seem like idiots and the time for ignoring inflation is now past us and a Fed that’s fighting inflation is generally fighting fun – it is time for Daddy to take your TBills away…..

Ah, remember the 60s, when “now” used to rhyme with “now” – life was so simple then (or maybe we were idiots?).  I think that’s called the Canadian/Japanese Rhyme Scheme (just say whatever and end each sentence in “Eh” or “Neh“)?

Anyways, the Fed said whatever in their statement but it was the data that changed – especially the “Dot Plot“, which now shows 7 Members favoring a rate hike (gasp!) next year and pretty much all of them expecting to be (gasp!) 0.5% higher in 2023.  Of course 0.5% is TRIPLE the current rate so gasp! indeed.  Meanwhile, as pointed out by Sven Henrich: “Not a single question (at the FOMC press conference) by the media about record and expanding wealth inequality, asset bubbles, speculative behavior, or the homeless camps.

As I noted yesterday, there are far too many crises or in fact, crisises for us to focus on more than one at a time.  It’s like worrying about spilled wine on the carpet of the Titanic as the ship splits in half, bursts into flames and sinks to the bottom of sea – pick a crisis!  At least the icy waters will put out the fire, right?  That’s kind of how we’re going now – relying on Keynes’ adage on debt and why we shouldn’t worry about it in the long run (because we’ll be dead by then).  In fact, almost 1/2 the population of the planet now live in places that will be uninhabitable by 2070 - so what’s a little Wealth Inequality between survivors? 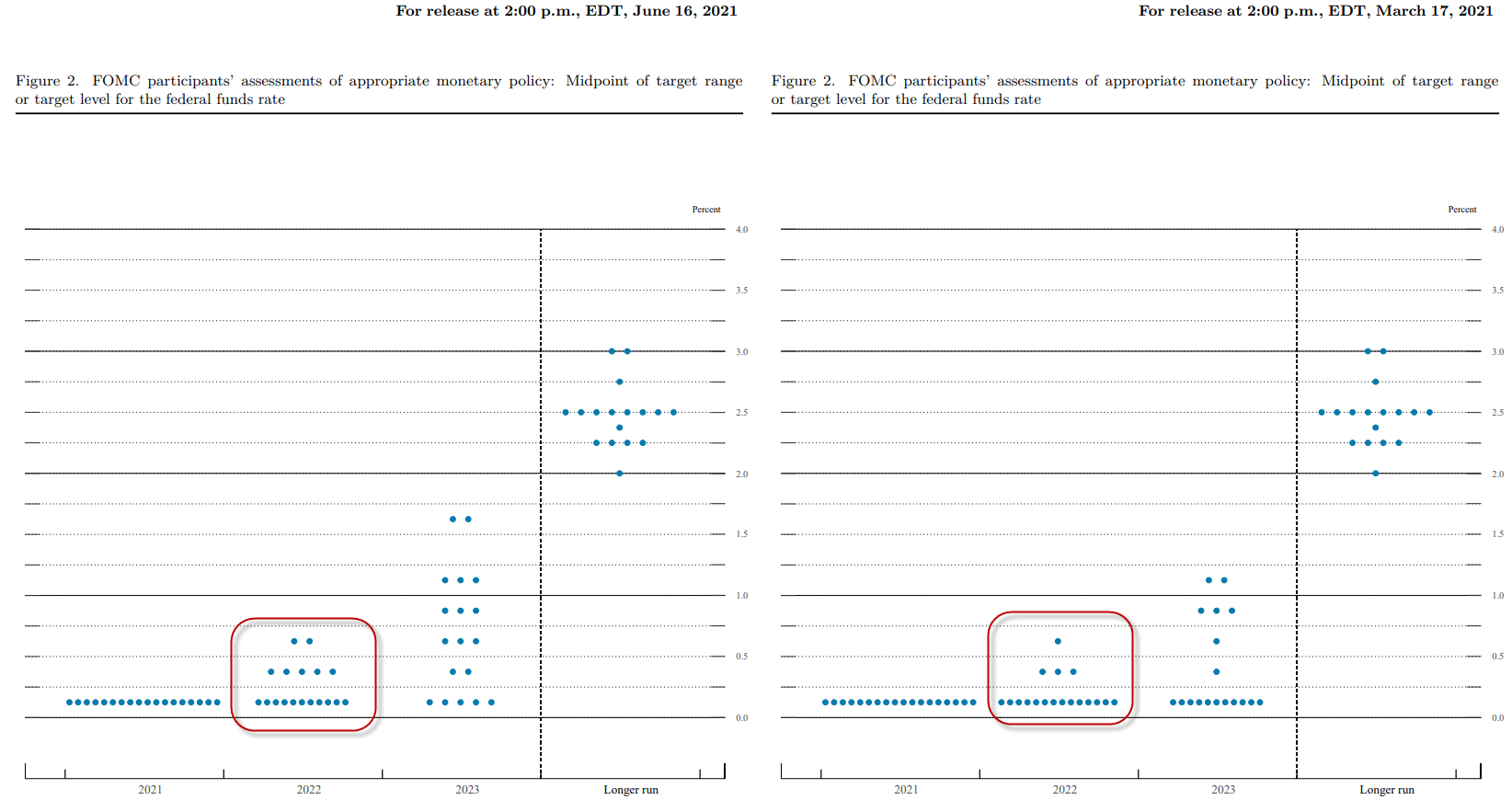 What people should really be paying attention to is the “Longer Run” Dot Plot, which indicates 2.5% is the expected rate after 2023.  Keep in mind this country is already $28.5 TRILLION in debt and we’re running a $3.6 TRILLION deficit this year and not likely to be less in 2023 so we’ll be about $35Tn in debt with interest rates over 3% or $1Tn a year in interest alone just to service our debt. 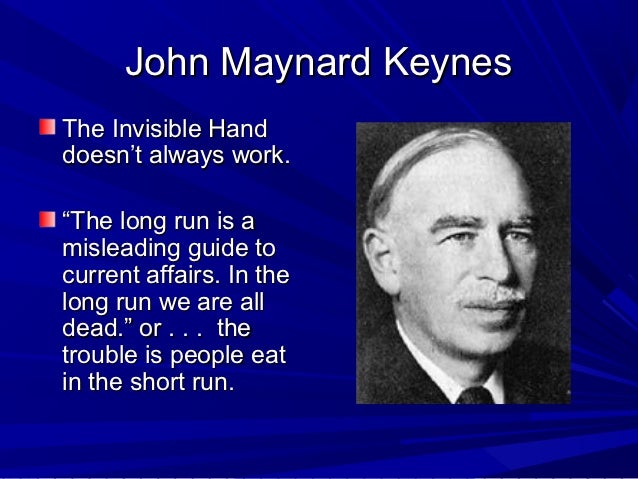 Since the Government only collects $3.4Tn in tax revenues, so just paying the interest will consume 1/3 of that or they can raise taxes 30% to balance it out (pause for laughter) or maybe 60-90% to start paying down that debt (long pause).  That’s right, Fiscal Collapse is as inevitable as Global Warming but both are in the future – so we can ignore them and play stock market for now.  As Keynes also said – people gotta eat!

Unfortunately, food costs are rising out of control, up 25% since last year and Gasoline is up 100% but, as I said, too many things to worry about.  More to the point, we just got the Philadelphia Fed Report and it was a little disappointing as Current Activity dropped to 30.7, down from 45 after the stimulus checks went out.

The Prices Paid Index rose for the second consecutive month, 4 points to 80.7, its highest reading since June, 1979.  The percentage of firms reporting increases in input prices (82%) was higher than the percentage reporting decreases (1%). The Current Prices Received Index rose for the fourth consecutive month, moving up 9 points to 49.7, its highest reading since October 1980 but still lagging Prices Paid by a very wide margin and that kind of gap is very bad for Corporate Profits – in the short run:

The main points scored to the upside on this survey (and many others) come from optimism about the future.  Even though inflation is rampant and prices are rising, the Fed, the Administration and our beloved Corporate Media have all told us how great things are so no one should be concerned.  Pay no attention to the man behind the curtain, etc.

I guess there’s a certain legitimacy to manipulating Consumer Sentiment since Consumer Sentiment drives the economy so, if you want a stronger economy, you need to convince the consumers things are going to be great.  Is that manipulation or just doing your job?  Doctors want you to have a positive attitude to combat disease but should they lie to you about your condition?

Be careful out there.

Would you like to read up-to-date articles on the day they are posted? Click here to become a part of our growing community and learn how to stop gambling with your investments. We will teach you to BE THE HOUSE – Not the Gambler!