Donald Trump knowingly hosted a private dinner at Mar-a-Lago for antisemite Holocaust deniers Kanye West and Nick Fuentes, how do you come back from that?

From my perspective, Donald Trump had the opportunity to drain the Swamp and never took it, and now that error of omission has come back around in spades. Trump never cleaned out the operatives from the Obama administration, which in turn allowed them to leak everything he said, which led to his enemies being able to tie him up with the phony Russian Collusion narrative. It’s a battle that would never have been fought had he cleaned house from the start. Yesterday the Trump Organization was found guilty on all 17 counts of tax fraud, he is rapidly running out of runway.

“For Mordecai the Jew was next unto king Ahasuerus, and great among the Jews, and accepted of the multitude of his brethren, seeking the wealth of his people, and speaking peace to all his seed.” Esther 10:3 (KJB)

What a stunning dichotomy it is watching Donald Trump in 2022 than it was in 2016. He has gone from everything he said and everything he did prospering to making mistake after mistake, with seemingly no end in sight. What could account for it? We wrote 6 years ago that Donald Trump was God’s man to get a specific job done, and that job turned out to be the signing of the Abraham Accords. From that point on, it was like God took His hand off of Trump. Then there’s the now-infamous dinner at Mar-A-Lago Trump had with antisemites Kanye West and Nick Fuentes.

Conservative talk show host Michael Savage, speaking of that ill-fated fête, said “We can mince words all we want but Mr. Trump made a mistake — hubris, nemesis, catharsis — he became his own nemesis, his own worst enemy.” That pretty much sums up not only that dinner, but most of what’s transpired since he lost the election to Biden in 2020. “This is a disaster not only for Donald Trump, it’s a disaster for all Republicans,” Savage said. “All the minorities that have been courted for so long now to join the Republican Party — this set us back 30 years and it’s not going to be forgotten simply because we want it to be forgotten.”

How deep does the rabbit hole go? Consider this. Could it be possible that Kanye West and Nick Fuentes were sent to Mar-a-Lago for the express purpose of ensuring that Donald Trump has no chance to win in 2024? Because to me, it seems like a set-up, like a hit job. When he was president, Donald Trump moved the US Embassy from Tel Aviv, and declared Jerusalem to be the undivided capitol of Israel. Two weeks ago he knowingly hosted a private dinner for antisemite Holocaust deniers. Why on earth would Trump do that? How do you come back from that? You don’t, and you can’t. The Trump Train is officially off the tracks.

Oh, one more thing, wanna know what happened last week? Joe Biden officially announced his intention to run for president in 2024, not to the media, but in a toast with Emmanuel Macron at the White House. You want to know what the future holds? You’re looking at it. 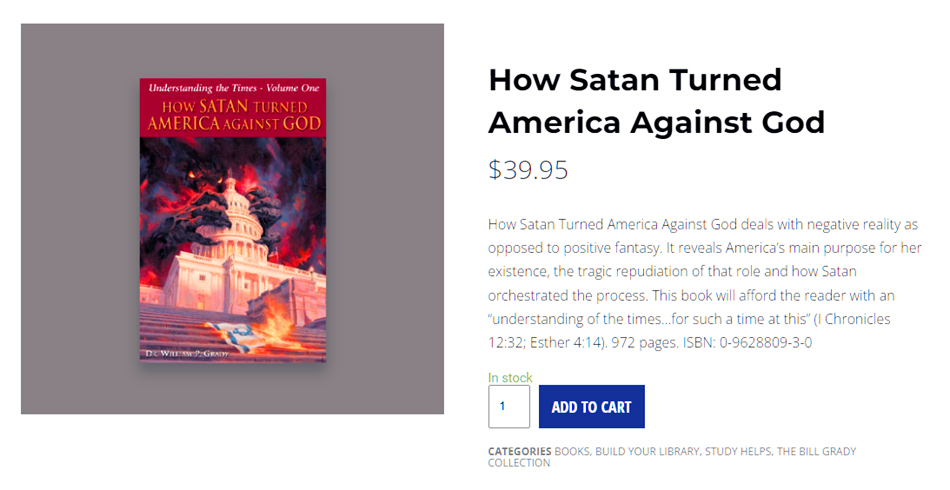 When you contribute to this fundraising effort, you are helping us to do what the Lord called us to do. The money you send in goes primarily to the overall daily operations of this site. When people ask for Bibles, we send them out at no charge. When people write in and say how much they would like gospel tracts but cannot afford them, we send them a box at no cost to them for either the tracts or the shipping, no matter where they are in the world. We have a Gospel Billboard program. We are now broadcasting Bible studies, Podcasts and a Sunday Service 5 times a week, thanks to your generous donations. All this is possible because YOU pray for us, YOU support us, and YOU give so we can continue growing.

CLICK NOW TO HELP US SEND THOUSANDS OF KING JAMES BIBLES INTO JAIL, PRISONS AND DETENTION CENTER ALL ACROSS AMERICA!!

But whatever you do, don’t do nothing. Time is short and we need your help right now. The Lord has given us an open door with a tremendous ‘course’ for us to fulfill that will create an excellent experience at the Judgement Seat of Christ. Please pray for our efforts, and if the Lord leads you to donate, be as generous as possible. The war is REAL, the battle HOT and the time is SHORT…TO THE FIGHT!!!

“Looking for that blessed hope, and the glorious appearing of the great God and our Saviour Jesus Christ;” Titus 2:13 (KJB)

The post As The House Of Trump Begins To Crumble, It’s More Of An Implosion From Within Than Any Attack His Enemies Have Tried To Ensnare Him In appeared first on Now The End Begins.