Nearly half of adults in the United States have hypertension, a condition that raises the risk for heart disease and stroke, which are leading causes of death in the U. S.

At Baylor College of Medicine, Dr. David J. Durgan and his colleagues are dedicated to better understand hypertension, in particular the emerging evidence suggesting that disruption of the gut microbiota, known as gut dysbiosis, can have adverse effects on blood pressure.

The human gastrointestinal tract is home of the gut microbiota, a large community of resident microorganisms known to influence host physiology in health and disease. 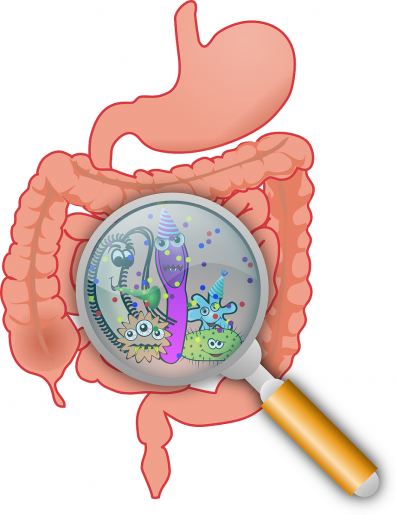 “Previous studies from our lab have shown that the composition of the gut microbiota in animal models of hypertension, such as the SHRSP (spontaneously hypertensive stroke-prone) rat model, is different from that in animals with normal blood pressure,” said Durgan, assistant professor of anesthesiology at Baylor. 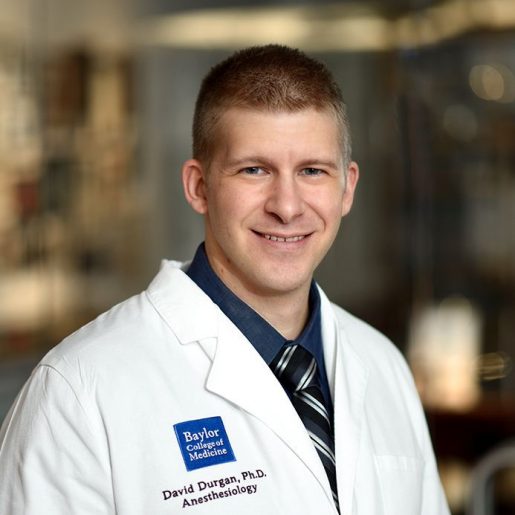 The researchers also have shown that transplanting dysbiotic gut microbiota from a hypertensive animal into a normotensive one (one having a healthy blood pressure) results in the recipient developing high blood pressure.

“This result told us that gut dysbiosis is not just a consequence of hypertension, but is actually involved in causing it,” Durgan said. “This ground work led to the current study in which we proposed to answer two questions. First, can we manipulate the dysbiotic microbiota to either prevent or relieve hypertension? Second, how are the gut microbes influencing the animal’s blood pressure?”
Can manipulating the gut microbiota regulate blood pressure?

To answer the first question, Durgan and his colleagues drew on previous research showing that fasting was both one of the major drivers of the composition of the gut microbiota and a promoter of beneficial cardiovascular effects. These studies, however, had not provided evidence connecting the microbiota and blood pressure.

Nine weeks after the experiment began, the researchers observed that, as expected, the rats in the SHRSP control had higher blood pressure than the normal control rats. Interestingly, in the group that fasted every other day, the SHRSP rats had significantly reduced blood pressure when compared with the SHRSP rats that had not fasted.

“Next, we investigated whether the microbiota was involved in the reduction of blood pressure we observed in the SHRSP rats that had fasted,” Durgan said.

These results demonstrated that the alterations to the microbiota induced by fasting were sufficient to mediate the blood pressure-lowering effect of intermittent fasting.”

Graphical abstract of this work. 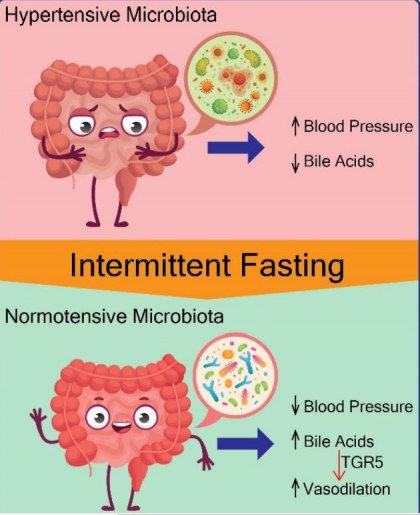 Image courtesy of the authors/Circulation Research, 2021.

How the microbiota regulates blood pressure

The team proceeded to investigate the second question of their project. How does the gut microbiota regulate blood pressure?

“We applied whole genome shotgun sequence analysis of the microbiota as well as untargeted metabolomics analysis of plasma and gastrointestinal luminal content. Among the changes we observed, alterations in products of bile acid metabolism stood out as potential mediators of blood pressure regulation,” Durgan said.

Taken together, the study shows for the first time that intermittent fasting can be beneficial in terms of reducing hypertension by reshaping the composition of gut microbiota in an animal model.

“This study is important to understand that fasting can have its effects on the host through microbiota manipulation,” Durgan said. “This is an attractive idea because it can potentially have clinical applications. Many of the bacteria in the gut microbiota are involved in the production of compounds that have been shown to have beneficial effects as they make it into the circulation and contribute to the regulation of the host’s physiology. Fasting schedules could one day help regulate the activity of gut microbial populations to naturally provide health benefits.”

Find all the details of this study in the journal Circulation Research.