If you have heat and power, thank a coal miner, pipeline builder, or fracker near you.

As of writing, Texas is colder than Alaska, and the mighty Danube is freezing over in southern Germany. This is far from the first time Westerners have experienced terrible cold snaps—the Thames River regularly froze over between 1309 and 1814—but it may be the first time two of the world’s greatest energy powerhouses unilaterally divested themselves of the ability to heat their own citizens’ homes.

Germany, the land of coal, and oil-rich Texas are in the process of exchanging their coal power plants—powered by a abundant, scalable, and relatively cheap resource—for expensive and unreliable renewables because it is ideologically chic. This winter, they’re paying the price with ice-covered solar panels and idled and frozen wind turbines (some 30,000 in Germany alone), all rendered useless by bad weather. So much for the grand, “green” future envisioned by the Left.

Battling cold weather has been a challenge for people living in the Northern Hemisphere for centuries. A 2015 study reported that the cold kills 20 times more people than heat. Not long ago rolling blackouts and power rationing were the stuff of Third World countries too unstable and energy poor to keep the lights on 24/7. Just 30 years ago Westerners marked the Soviet Union’s energy poverty by its failure to keep its people from freezing to death when winter rolled around—something Eastern European countries have struggled to fix ever since breaking free of Communism.

At least Germany and Texas can still rely on existing “fossil fuel” and nuclear power to provide some back-up power, but their fossil fuel portions are shrinking rapidly, and Germany is phasing out its nuclear plants. For example, renewables generated 25 percent of the electricity distributed in 2020 by the Electric Reliability Council of Texas (ERCOT), up from 2 percent in 2006. Coal’s portion dropped from 37 percent to 18 percent during the same period. (ERCOT handles 90 percent of the state’s electric load.) 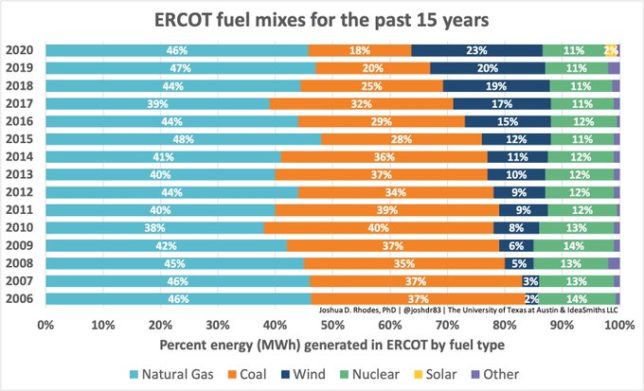 Yet in a world 100 percent dependent on renewables, there’d be no backup. We’d freeze our way through winter. How long do you imagine people would watch their families suffer before taking an axe to nearby forests?

Yet the Democratic Party and the Biden administration are championing the very policies that have led to this self-inflicted harm. They want to totally transform the U.S. economy with the $10 trillion Green New Deal, guaranteeing a miserable future for the next generations of Americans.

President Biden has a deep well of support from the Left’s legion of professional activists, think tanks, lobbyists, and lawyers bent on ramming the most radical climate legislation in history through Congress. This is a well-funded, tightly coordinated cabal of special interests. In 2019 alone the eco-Left spent an estimated $2.4 billion on “green” activism.

And it’s a fraud. The Green New Deal was never about the climate or preserving the environment. It’s a leftist takeover of every part of American life, from the food we eat to where we live and the job we have. Green New Deal author Saikat Chakrabarti, who let it slip to the Washington Post in 2019: “Do you guys think of it as a climate thing? Because we really think of it as a how-do-you-change-the-entire-economy thing.”

The need for a Green New Deal is more pronounced than ever, as marginalized communities are impacted by intersecting crises of climate change, increasing income/wealth inequality, and rising white nationalism and neo-fascism. [emphasis added]

So much for saving us from a climate-induced apocalypse. This is about rectifying the Left’s favorite evils, summed up in the oxymoron “environmental justice.” Environmental justice is the intersection of Critical Race Theory and global warming. Combined, they are a powerful propaganda tool to justify fundamentally changing anything leftists deem racist and/or a threat to climate stability.

That includes jailing dissidents, by the way. Biden—who was widely hailed by the left-leaning media as an old-school moderate—included directing the Environmental Protection Agency (EPA) to pursue climate “polluters” to “the fullest extent permitted by law” and introducing legislation “to hold corporate executive personally responsible” with “jail time” among his campaign promises.

The Left’s climate rhetoric is a roadmap to what the Left really wants: a cold, destitute, authoritarian nightmare for all but the ultra-rich and politically correct. That’s the future of America under the Green New Deal.

Loading...
"Not by might, nor by power, but by my spirit, saith the Lord of hosts." Zechariah 4:6
BEFORE IT'S NEWS ON TELEGRAM
GET THE TELEGRAM APP - https://telegram.org/ JOIN OUR CHANNEL - https://t.me/BeforeitsNews
Read it..
BEFORE IT'S NEWS
SIGN UP FOR OUR NEWSLETTER
Today's Top Stories
Bush Funeral “The Envelope Affair” Solved! The Black Mirror Of Mike Pence. Must See Videos!
Scott McKay Patriot Streetfighter #80: Cirsten With Monster Intel Drop!! - Must Video
X22Report: Who Will Be Next? Watch NY! Patriots Planned & Set The Trap! Justice! - Must Video
Q+ Trump's Return! Pipeline, Election, Audits HACKED! War In Israel! Gold Destroys The FED! We Have It All!
New McAllister: He Likes to Strangle Kids - The Case Against Pence
Eric Clapton after COVID vaccination: ‘I should never have gone near the needle’
What Really Just Happened Above Arizona
Simon Parkes: Trump Legacy, QFS, Covid, Vaccines, etc via The River's Edge
What Have They Injected You With!? Why Do Magnets Stick to the Injection Site of the Jab?
This Is Evidence For a Possible Marek's Disease Outcome, Where Vaccinated People Spread the Virus Aggressively to the Unvaccinated” Alex Berenson
Loading...
Featured
It's Going To Be Biblical! Digital Soldiers Enlisted in God's Army! Romans 8: Overcomers and More Than Conquerors!
Creeping Totalitarianism Is Here! - The Dan Bongino Show
Alex Jones: "It's Biblical! The Algorithms show the Globalists have been defeated."
‘Stop All Covid Vaccinations’
Man Sees Heaven and Hell *Listen Carefully*
“Vaccine” Side Effect: COVID Arm
Nicholas Veniamin & Sonya Nagy Discuss Power Back to The People! - Must Video
Mel K Welcomes Back Big Pharma Insider & Truth Warrior Michael L with Some Shocking Info 5-13-2021 - Must Video
Gun Historian Ashley Hlebinsky Drops Truth Bombs in ‘Ghost Gun’ Hearing
Situation Update: The Stages of Medical Fascism - 5/13/21 - Must Video
Top Global
‘Stop All Covid Vaccinations’
“Vaccine” Side Effect: COVID Arm
SouthFront: No Quarter For Gaza - Netanyahu Rejects Hamas Ceasefire
Palestinian/Israeli update 5/13/2021..Israel Defense Forces prepare for ground operation in Gaza as tensions intensify
Biden Gives Money To Palestine, Rockets Fall On Israel! - Joel Pollak On Gaza Conflict! - Rebel News Must Video
1000 Minnesotans take the streets to protest attacks on Palestine
The Greta Reset and Satan Klaus' Cyber Plandemic - Dollar_Vigilante
Bucharest Nine Escalates Tensions, Demanding More US Troops in Eastern Europe
“Old Europe” Does Not Trust “New Europe” Involvement in European Rapid Reaction Force
Scott McKay Patriot Streetfighter #80: Cirsten With Monster Intel Drop!! - Must Video
Loading...
Top Alternative
U.S. Army: Emma’s Calling
A Dumbed Down Society Getting Dumber and Dumber with Greg Mannarino
Best AR 15 Scopes – How & What Rifle Optics To Choose ~ VIDEO
Buycotts! Do Not Feed The Beast That Is Trying To Enslave You! Must See Videos!!
SouthFront: No Quarter For Gaza - Netanyahu Rejects Hamas Ceasefire
Nebraska: Three Pro-Gun Bills Bundled Together into Omnibus Legislation
Extraterrestrial First Contact: Why the Aliens Should be Polite and Say Hello
FAQ: DarkSide Ransomware Group and Colonial Pipeline
Surprise Geomagnetic Storm
Removing Some Darkness Of Today By Revealing Some Truth! Must See Video!!