(Natural News) Most readers no doubt still have images in their minds of cities burning and businesses being looted by the hundreds following the death of Minneapolis resident George Floyd a year ago next month.

While the initial rioting was directly linked to the incident, it was quickly seized upon by Marxist organizations like Black Lives Matter and Antifa and used it to justify general lawlessness and anarchy.

It now looks like we can reasonably warn readers that those scenarios are soon going to be recreated, especially given the recent inability of prosecutors to actually prove that former police officer Derek Chauvin, infamously pictured in a video kneeling over Floyd as he pinned him to the pavement, is a murderer.

According to Andrew Branca at Legal Insurrection, a legal analysis and news site that has been following the Chauvin trial, the prosecution is not having much luck in effectively proving ‘beyond a reasonable doubt’ that the former officer intended to kill Floyd or even that his actions to restrain Floyd led to the suspect’s death:

The bottom line, however, is that two of the state’s most important witnesses, the Minneapolis Police Department use-of-force trainer Lieutenant Johnny Mercil and the MPD medical services coordinator Sergeant Nicole MacKenzie, both provided extensive testimony highly favorable to the defense on cross-examination—and therefore, of course, highly damaging to the prosecution.

Indeed, so effective was the testimony of the medical coordinator for the defense, that the defense has informed the court that they intend to re-call her as a defense witness when it’s the defense’s turn to present the jury with their case in chief.

When Branca wrote that assessment, it was nearly a week-and-a-half into the state presenting its evidence and narrative to jurors. And to that point, Branca said he “would have characterized the prosecution’s performance as weak, scattered, and not entirely internally coherent,” all of which are not favorable for a conviction on murder charges “beyond a reasonable doubt.”

In fact, Branca said the lack of a coherent prosecution creates the conditions for ‘reasonable doubt.’

But in terms of the most recent cross examination to date, Branca described it as “a genuine catastrophe for the state on a level” not seen for prosecutors “since the trial of George Zimmerman.”

“In the Zimmerman case, the bad days for the prosecution were not isolated events, but rather occurred sequentially, day after day, with each day seemingly being worse for the prosecution than even the previous horrible day. Whether that will prove to be the case in Minnesota v. Chauvin remains to be seen—but it doesn’t look good for the prosecution so far,” Branca wrote.

Now, even if somehow the prosecution can recover and present a case well enough to convince a jury to convict Chauvin of lesser crimes he has been charged with, understand that won’t be good enough for the BLM anarchists who are no doubt already planning to respond by burning and looting again, as an excuse.

The BLM movement isn’t about George Floyd. In fact, one of BLM’s co-founders, Patrisse Khan-Cullors, just bought a $1.4 million home in the Topanga Canyon Compound development located in California, a majority-white community in which she even admitted to using a white realtor to seal the deal.

Does that sound like someone who is truly concerned about the lives or ordinary black people, much less one black man with a violent criminal past who was reportedly doped up on fentanyl and other drugs when he was resisting Chauvin and three other officers last May?

Hardly. This woman has ‘scored’ big off her movement and she isn’t looking back.

And what’s more, she isn’t speaking out against BLM supporters, urging them not to burn cities. She’s got hers, so she isn’t saying anything to jeopardize it. 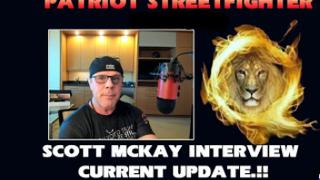