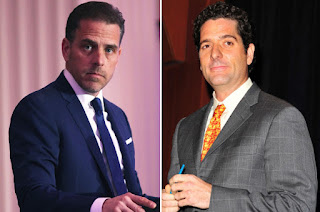 It’s always been known that Joe Biden and John Kerry shared many decades in the Senate together, what isn’t known however how deep is that bond, and subsequent corruption.

Kerry and Biden were pretty cleaver in how they hid their backroom dealings. Here we go again, with familiar names, Hunter Biden and Chris Heinz team up to create a Hedge fund known as Rosemont Capital while John Kerry was the Chairman of the Foreign Relations Committee later to become the Secretary of State under Barack Obama.

In 2009 the 39 year old Hunter Biden teamed up with Chris Heinz, son of Teresa Heinz and step son to John Kerry. They were later joined in the firm by Devon Archer. The company Rosemont Financial was formed from the name of the Kerry family farm Rosemont Farm in Chapel PA.

Over the ensuing years Joe Biden and John Kerry secured some highly sensitive deals with foreign Governments while their sons locked into so very lucrative deals with those same governments.

Because these companies were private equity firms they didn’t have to report their dealings publicly. Time after time Hunter and Chris were securing deals with these governments shortly after government deals were set up by their fathers.

Most troubling is a deal with the Bank of China. Unlike the Bank of America, the Bank of China is owned entirely by the Chinese Government. Rosemont Seneca joined forces with a consultancy group named the Thornton Group owned by “Whitey” Bulger’s nephew James Bulger.

Just one year after Rosemont Seneca’s inception Hunter and Chris with the help of Thornton Group had secured massive financial deals even though they were a fledgling company with hardly any real experience.

Another meeting in 2011 inked a more lucrative deal with China even though they were still small and had relatively little experience.

It couldn’t be more obvious to the lay person that Hunter and Chris were merely influence peddling, while siphoning ill-gotten gains to their father’s accounts.

Rosemont Seneca and the Bank of China formed a new $1 billion dollar hedge fund called Bohai Harvest RST which the RST stood for Rosemont Seneca, Thornton. This placed these two sons and the richest start up hedge fund in the world in just 2 ½ years!

This doesn’t even touch on the Ukrainian Energy Situation from Hunter Biden.

There is also a connection with Rosemont Seneca Technologies tying them to the Wuhan Lab by way of EcoHealth Alliance the group that secretly funded Gain of Function experiments by Dr Fauci.

When are we going to investigate Hunter Biden America?