Time to Prosecute This Guy! 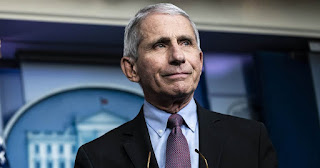 He’s been the director of the NIAID for 37 years, he’s been in the Dept. of Health for over 50 years in one way or another. He’s served every President since Ronald Reagan, but it seems now that he has not only outlived his usefulness but might be responsible for millions of deaths from his actions in the Covid-19 pandemic.

He boldly prophesied a new pandemic that Donald Trump would be facing in his presidency in 2015. What did the man know and when did he know it? Did he violate a Presidential Order to stop dangerous Gain-of-Function experiments and hand them over to the Wuhan Institute of Virology in China, all the while knowing that their safety measures were sloppy to say the least?

In recent clashes with Senator Rand Paul, Fauci stated rather boisterously that Sen Paul was lying about how Fauci funded the Wuhan Lab by a back door grant through Eco Health Alliance against President Obama’s wishes.

In 2014 President Obama halted all gain-of-function funding on 22 fields including SARS, MERS and influenza. Obama felt that the gain-of-function purpose of increasing the deadliness of these diseases had no real place in American Research and was extremely dangerous.

Fauci however had disagreed with Obama because in 2012 he wrote a paper on how gain-of-function was so important. After the 2014 Presidential Order to stop all research in that field Fauci found a back door way of refunding that research through a grant to Eco Health Alliance.

The doctors involved in the research at the Wuhan Lab even mentioned their thanks to Anthony Fauci for providing the funding necessary to continue.

Unfortunately for Fauci Senator Paul had the very documents in his hand that supported his claim, and now Fauci is trying to backtrack on his lie. In his 2012 paper Fauci said this :

“In an unlikely but conceivable turn of events, what if that scientist becomes infected with the virus, which leads to an outbreak and ultimately triggers a pandemic? Many ask reasonable questions: given the possibility of such a scenario – however remote – should the initial experiments have been performed and/or published in the first place, and what were the processes involved in this decision?

Scientists working in this field might say – as indeed I have said – that the benefits of such experiments and the resulting knowledge outweigh the risks. It is more likely that a pandemic would occur in nature, and the need to stay ahead of such a threat is a primary reason for performing an experiment that might appear to be risky.

Within the research community, many have expressed concern that important research progress could come to a halt just because of the fear that someone, somewhere, might attempt to replicate these experiments sloppily. This is a valid concern.”

It would appear that Dr. Fauci was right on a few accounts, it was totally irresponsible of him to refund a research project that was officially shut down by the President ( not just one year but from 2014-2019.) He knew what he was doing was not only illegal but extremely dangerous because he handed over this research to a lab in China known for their sloppy safety protocols.

Fauci has been caught with his hand in the cookie jar so to speak, and personally I don’t see a way in this wide world that he will survive in his position much longer let alone escape prosecution for the outbreak that has killed millions of innocent people.

Fauci is THE highest paid Health Official in the USA, in fact only two other Health Officials other that Fauci are paid more that the President of the United States. Along with this high pay should come accountability. Fauci broke the law, now it’s time to deal with him as he should be dealt with, not only his actions on the Covid-19 situation but his unfettered actions on insider trading that allowed him to become the multi-millionaire he is today. If he did in fact fund this research against the wishes of the President then he may be responsible for almost as many deaths as Adolph Hitler!