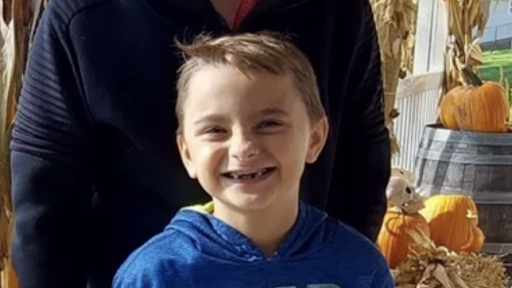 Mohamed Omar is a Swedish writer and apostate from Islam. He has written the below op-ed for the conservative Swedish news outlet, Det Goda Samhallet. This is one Swede’s reaction to the Waukesha massacre and other racially-tinged incidents in the US.

For the so-called “anti-racists”, white life does not matter. Last Sunday (November 21. 2021), black power follower Darrell E. Brooks drove his SUV into a Christmas parade in Waukesha, Wisconsin. He killed 6 persons and injured about 50.

Darrell E. Brooks belonged to a black power sect, The Five Percent Nation, which teaches that black people are a master race and white people are “devils”.

Here are the names of the victims:

Reason: All the victims were white.

The above picture shows one of the victims, the 8-year-old boy, Jason Sparks.

George Floyd was a criminal doper who died during a police arrest. The victims of the hateful terror attack in Waukesha were completely innocent. Their only crime was that they had the wrong skin color.

The Christmas parade’s motto was “Comfort and Joy”. Many of the participants were children. It was turned into a bloodbath.

The Black Lives Matter movement says it fights against police brutality. But when Hannah Fizer, 25, on 13 June 2020, was killed by police, nobody demonstrated. I have Googled it and can state that no Swedish media has called her name. Not even alternative media. The only media who named her is Det Goda Samhallet (The Good Society) on June 22, 2020. The lack of interest can be for no other (reason) than she was white.

On July 15, 2017, another white woman, Justine Damond, was shot to death by a black policeman in Minneapolis. She was innocent. Have you seen her name in the mainstream media? How many recognize her face?

The 24-year-old mother of a small child, Jessica Doty Whitaker, was shot in the head after an argument with a group of black men in her hometown of Indianapolis. She reportedly said, “All lives matter”, which provoked them.

Don’t white lives matter? No, not according to the progressive and “anti-racist Cambridge professor, Priyamvada Gopal, who on June 22 of last year, posted a tweet with the message, “White lives don’t matter”. Since then many controversial tweets have been found in her account, among others, one in which she expresses a wish to “kneecap white men.”

In tweets, she tells of how every day, she has to control herself to not shoot white men.

”I resist urges to kneecap white men every day.” 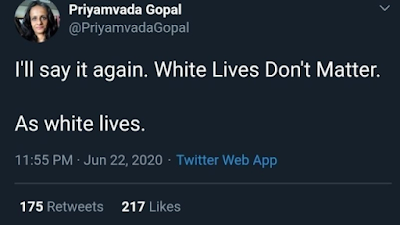 What really differentiates this so-called “anti-racism” from racism?
Isn’t this “anti-racism just anti-whiteness?
—————————————————————————————————————-
One does not have to be a white racist or white nationalist to agree with many, if not all the points that Omar raises. It is not my wish to address each of the incidents mentioned by Omar. But he is correct in making the case that lashing out at all whites in hate and violence is hardly the solution to our racial issues. The fact of the matter is that innocent people are being killed in the name of a nascent ideology (Black Lives Matter) that has little to do with actual civil rights. It is not just white people. Asians and Jews (who come in all colors) are being victimized as well over perceived historical wrongs committed against black people.
Unfortunately, far too many of Omar’s fellow Swedes don’t share his opinion. Sweden today is dealing with feelings of guilt over the fact that they are a wealthy and successful country and that they somehow owe it to people from other parts of the world to be able to migrate to Sweden and mistreat the native Swedes while enjoying the fruits of their “adopted” country.
I do not post this as some sort of call to white nationalism, which I reject. My wish is for reconciliation, justice for all, and harmony. I am sure any educated Swede knows the name of George Floyd. In that case, justice has been served. But as Omar notes, how many Swedes know the names of the innocent victims of Waukesha? For the sake of God, we should at least remember the name of Jackson Sparks. He was only 8 years old!
His life, as well as the lives of the other victims, mattered