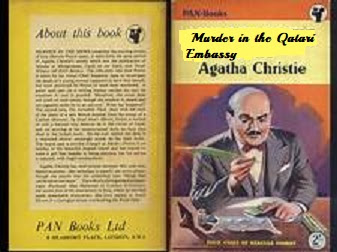 On Monday, France experienced yet another murderous attack carried out to the cry of “Allahu akhbar“, this time at the  Qatari embassy in Paris, where a man (well-known to the police, as usual) attacked and murdered a  security guard. Even more shocking, upon arrival at the embassy, the police had to wait almost an hour for official permission to enter the embassy-all while the murder was taking place.

The below article in today’s Boulevard Voltaire gives details of the attack and asks why these attacks are always dismissed as the work of somebody who is mentally ill. Translation by Fousesquawk.

To the cry of Allahu Akhbar, a man strangled at embassy of Qatar: More than terrorists, nothing but madmen!

In the face of the unbelievable attack that took place Monday morning at the embassy of Qatar, are we to invoke the psychiatric state of the murderer? The facts, this time due to the diplomatic context, are staggering. At 6:30 in the morning, the cleaning lady calls the police, stating that a fight is happening in the lobby of the embassy. An individual is in the process of massacring the guard. The police arrive 5 minutes later but cannot enter: They require written authorization from the ambassador or one of his representatives. According to the police report (viewed by Europe 1), ” It was only around 6:50 that a counselor of the embassy of Qatar arrived in front of the entry and asked the police to intervene.” The attacker continued the beating. At 7:05, the necessary document of intervention finally arrives, signed by a representative of the ambassador. While waiting for the order to come down through the hierarchy, the police and firefighters continue to (do nothing) during the massacre. “Finally, at 7:28 they get the green light from public order and traffic staff (DOPC)  to enter the embassy of Qatar, 53 minutes after their arrival,” The guard is dead, beaten and strangled. It was a 42-year-old Frenchman.

Of his murderer, we only know the initials, Ilies S. and the tumultuous past. He is, “well-known by the police services,” for violent acts against the police, outrages, and rebellion. Tested positive for cocaine, he “suffers from psychiatric issues,” and if he cried out, “Allahu Akhbar” several times before stating that he acted out of “revenge for his brothers”, it is obviously just a coincidence. Because we are telling you that he is crazy!

After the attacks that have bloodied France and occupied our justice system for months in dissecting the intentions and the moods of the Bataclan and Charlie (Hebdo) killers, France can finally breathe easy: There are no more terrorists, nothing but crazies in complete delirium. And that changes everything.

Like Toinette disguised as a doctor in front of Argan, we treat terrorists today like Moliere (treated) his Imaginary Invalid.

What do they say you are sick (from)?

- They say it is Islamism.

-They are all ignorant, it is your brain that is sick.

-From time to time I get headaches.

That’s how it is. After having predicted the spread of (lone wolf) terrorism, committed by self-radicalized individuals and being able to go into action at any time, anywhere,  we systematically attribute the commission of these crimes today to mental derangement of the perpetrators.

Soon, 7 years will have passed since the Bataclan (attack), marked by 21 major attacks, numerous attempts, and more than 60 foiled attacks. Islamic attacks on the police prefectures of Villejuif, Romans-sur-Isere, or Rambouillet: a priest or teacher with his throat slashed, passersby stabbed in the middle of the street, police attacked with knives, a 60-something woman tortured then thrown from a balcony………Whether committed by an Algerian student, a Sudanese, or a Malian delinquent, all these crimes have been to the cries of, “Allahu Akhbar“. What have we learned? That the perpetrators were “unbalanced”, “psychologically fragile individuals”, or having “psychiatric histories,” when they are simply acquitted on the pretext that they were drugged. In the face of the madmen of God, we only retain the adjective crazy……..