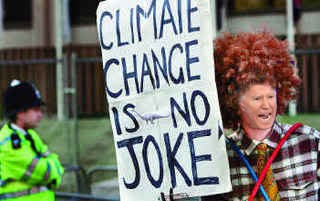 President Biden on Thursday pledged to carry on with climate action despite a Supreme Court ruling that restricted how his administration can respond to worsening global warming.

The president called the ruling curbing the Environmental Protection Agency’s (EPA) power “devastating” but said his administration would continue to look for ways to mitigate global warming.

“The Supreme Court’s ruling in West Virginia vs. EPA is another devastating decision that aims to take our country backwards,” he said in a statement.

“While this decision risks damaging our nation’s ability to keep our air clean and combat climate change, I will not relent in using my lawful authorities to protect public health and tackle the climate crisis,” he added.

And he will continue to see many of these knocked down by the courts, including the Supreme Court, because Congress did not specifically delegate the authority to create big rules/regulations, which is what the WV vs EPA ruling is about. You want this? Try and convince Congress to pass legislation. Better yet, start yourself. No more fossil fueled trips. He just got back from Europe yesterday and now is going to fly to Camp David. Most of the big wigs pushing this stuff the hardest are the biggest hypocrites

EPA Administrator Michael Regan similarly said in a statement Thursday that he was “committed to using the full scope of EPA’s authorities to protect communities and reduce the pollution that is driving climate change.”

You can blame a lot of this on Congress, for failing to write specific, targeted, detailed legislation, which gives the Executive Branch way too much leeway to do as they will. Democrat and Republican legislation. Stop giving this latitude.

Justice Kagan warns parts of East Coast could be ‘swallowed by the ocean’ in dissent in EPA case https://t.co/QcDPGKWA2m

Nation of Law, not Nation of Men. Dumbest justice on the court.