This news must have caused Hillary Clinton to hit the Chardonnay and head for the woods. Perkins Coie law firm is where Eric Holder hangs his shingle and a whole lot more of those claiming deep swamp status. So grab a glass and give a toast to our man John Durham. A Perkins Coie partner scalp is no small change. Add to that the New York Times also reports:

Some of the questions that Mr. Durham’s team has been asking in recent months — including of witnesses it subpoenaed before a grand jury, according to people familiar with some of the sessions — suggest he has been pursuing a theory that the Clinton campaign used Perkins Coie to submit dubious information to the F.B.I. about Russia and Mr. Trump in an effort to gin up investigative activity to hurt his 2016 campaign.

Mr. Durham has also apparently weighed bringing some sort of action against Perkins Coie as an organization. Outside lawyers for the firm recently met with the special counsel’s team and went over the evidence, according to other people familiar with their discussions, arguing that it was insufficient for any legal sanction.

WASHINGTON — John H. Durham, the special counsel appointed by the Trump administration to scrutinize the Russia investigation, has told the Justice Department that he will ask a grand jury to indict a prominent cybersecurity lawyer on a charge of making a false statement to the F.B.I., people familiar with the matter said.

Any indictment of the lawyer — Michael Sussmann, a former federal prosecutor and now a partner at the Perkins Coie law firm, and who represented the Democratic National Committee on issues related to Russia’s 2016 hacking of its servers — is likely to attract significant political attention. (Now that is saying something for the Times!)

Donald J. Trump and his supporters have long accused Democrats and Perkins Coie — whose political law group, a division separate from Mr. Sussmann’s, represented the party and the Hillary Clinton campaign — of seeking to stoke unfair suspicions about Mr. Trump’s purported ties to Russia. More at the New York Tiimes

The lawyer, Michael Sussmann, is accused of lying to the F.B.I. in a 2016 meeting about Trump and Russia. He denies wrongdoing.

Moreover, internal billing records Mr. Durham is said to have obtained from Perkins Coie are said to show that when Mr. Sussmann logged certain hours as working on the Alfa Bank matter — though not the meeting with Mr. Baker — he billed the time to Mrs. Clinton’s 2016 campaign.

Breaking report from the New York Times (Savage and Goldman, et al.): Special Counsel John Durham “will ask a grand jury to indict” former DNC/Clinton campaign lawyer (and Perkins Coie partner) Michael Sussman for giving false statements. The false statement charges would relate to a September 19, 2016 meeting FBI lawyer James Baker had with Sussman, where Sussman relayed to the FBI the discredited theory that the Trump Organization was communicating with Alfa Bank. 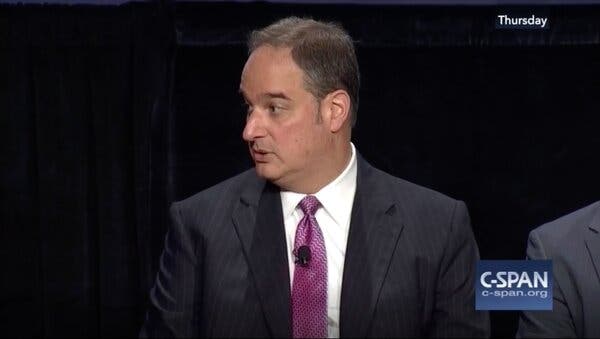 Michael Sussmann during a cybersecurity conference in 2016.Credit…via C-SPAN

Mr. Baker, the former F.B.I. lawyer, is said to have told investigators that he recalled Mr. Sussmann saying that he was not meeting him on behalf of any client.

This was contradicted by (1) Sussman’s testimony to Congress; and (2) Sussman’s own billing records. Sussman’s lawyers acknowledged “they expected him to be indicted.”

As to Sussman’s testimony, here is a portion where he discusses the Alfa Bank information was given to him by a clinet.

Questions have long been asked about Sussman’s involvement in the potential cover-up of the DNC hack in 2016. It was Sussman who brought in CrowdStrike (given his close relationship with founder Shawn Henry) to look into the DNC hack. According to Politico:

In late April [2016], the DNC’s IT department noticed some suspicious behavior and contacted DNC chief executive officer Amy Dacey, according to a DNC official. Dacey reached out to DNC lawyer Michael Sussmann, a partner at the Perkins Coie law firm and a former federal prosecutor specializing in cybercrimes. Sussmann called Shawn Henry, the president of cybersecurity firm CrowdStrike, to get his company’s help.

This CrowdStrike/Perkins Coie links put into perspective this information in the the New York Times article, where Durham

has been pursuing a theory that the Clinton campaign used Perkins Coie to submit dubious information to the F.B.I. about Russia and Mr. Trump in an effort to gin up investigative activity to hurt his 2016 campaign.

If that is the case, then we doubt it would be limited to the Alfa Bank allegations.

A good day in the swamp. A very good day.

For the best of the swamp push the button.