According to Ukrainian sources from Lisichansk, the Armed Forces of the Russian Federation and the LPR army are now advancing in almost all directions.  There is especially strong pressure on Privolye (there are street fights in the city), Disputable, Zolotarevka and Verkhnekamenka (there are also street fights there).Fighting also continues in Lisichansk itself. By lunchtime, according to the statements of the Ministry of Internal Affairs of the LPR, Allied troops controlled 50% of Lisichansk, counting with the suburbs. According to Volcheyarovka, fighting is still going on in the village, it is not completely controlled.
There is also information about the progress in the battles for the White Mountain. Foreign media report that the fall of Lisichansk is inevitable due to heavy losses of the Armed Forces of Ukraine.

It was with this title that a special report was released on the British TV channel.

The militants of the Armed Forces of Ukraine report that they were “swept away” in Severodonetsk, and they have no way to defend Lisichansk under the pressure of the “Russian military sledgehammer”.

“We saw how the exhausted Ukrainian troops retreated, changing positions.
Undoubtedly, the issue of capturing the city is a matter of days, soon Russian troops will be able to cordon it off, cut off and seize control,” Sky News Special Correspondent Alex Crawford said.

Operational situation on the stretch Soledar-Lisichansk-Rubezhnoye for June 30, 2022. 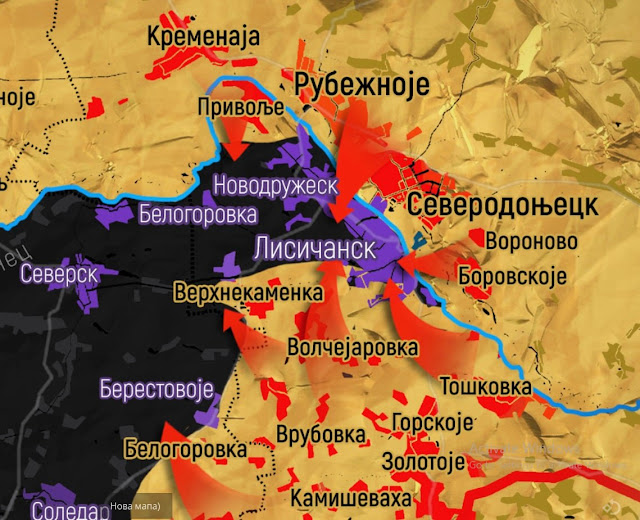 In the evening summary of the General Staff of the Armed Forces of Ukraine reports on the successes of the Russian military in three areas Lisichansk/Severodonetsk direction. The successful offensive of Russian troops and the LPR army in the area of Topolevka, Maloryazantsevo and Volcheyarovka is confirmed. Most of the territory of these settlements has already become part of the LPR, and the remnants of the APU are now being knocked out from the northern outskirts. The General Staff did not mention the retreat of the UAF in the Privolye area.| #UkraineWar | #Russia | #Ukraine |

Despite statements by officials of the Luhansk People’s Republic, the battle for Lysychansk is far from over. No control of 30-50% of the city is out of the question.

▪️ From the Severodonetsk side, the sweeping of the left bank of the Seversky Donets continues: scattered detachments of the AFU, the National Security Forces and the terrorist defense forces are hiding in dachas and groves. Until the entire territory is completely cleared, it is somewhat premature to speak of the establishment of full control.

▪️The cleanup of the Lisichansk oil refinery has been completed. Ukrainian units retreated to Zolotarevka are attempting to gain a foothold along the last route of retreat from Lisichansk. After capturing the village, Allied forces will deprive the Ukrainian Armed Forces of the only communication route between Lysychansk and Seversk. Ukrainian units are now retreating in the fields under artillery fire through Belogorovka.

The front line runs along the railroad near Novozolotarevka station. The village of Verkhnekamenka south of the railroad is controlled by the Russian Armed Forces. Fierce fighting is taking place.

▪️West of Lysychansk, Allied forces are advancing on Seversk from two directions: from the direction of the refinery to Verkhnyekamenskoye and from Nikolaevka to Spornoye.

To the west of Verkhnekamenskoye, the remnants of the 111th Brigade of the Tetra Defence are hurriedly setting up positions. Two man-portable air defense systems Stinger and Perun each remained as “serious” weapons.

▪️Fighting continues on the southern outskirts of Lysychansk near the RTI plant and Bila Gora.

▪️Chechen units crossed the Seversky Donets near Privolya from the direction of Staraya Krasnyanka and, together with the DNR People’s Militia, are storming the populated area. The report about the full capture of Privolya was premature: pockets of resistance remain in the village. 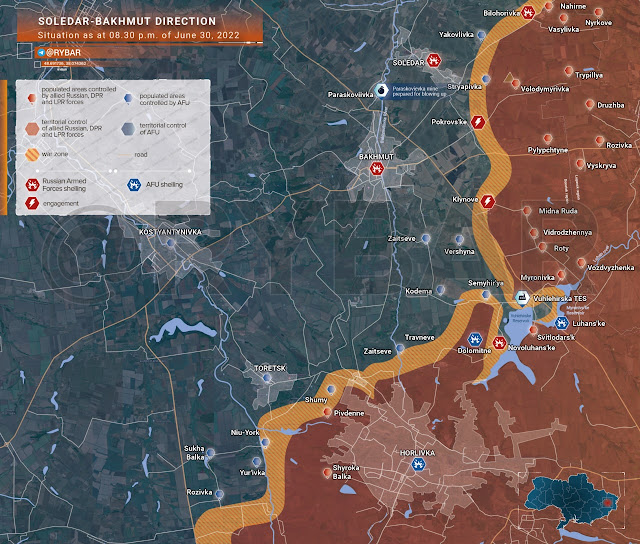 The Armed Forces of the Russian Federation have completed their assigned tasks on the Snake Island and have withdrawn the garrison stationed there. Thus, it has been demonstrated to the world community that the Russian Federation does not interfere with the efforts of the UN to organize a humanitarian corridor for the export of agricultural products from the territory of Ukraine. 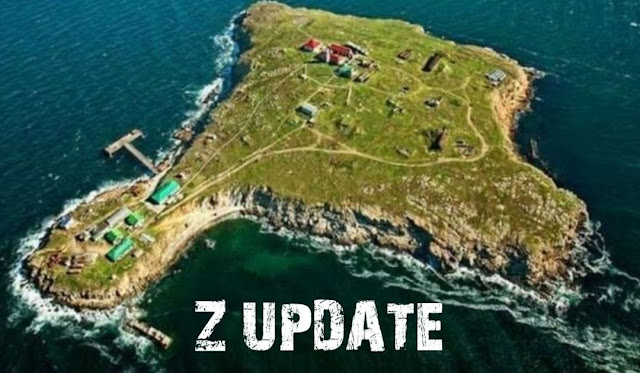 The russian command decided to leave Snake Island (again) and preserve the crew‘s lives who were stationed there after AFU started shelling the Island with long range artillery.

Thank god we have a General Staff that cares more about their soldiers than the Twitter victory.

It is “too early” for Kiev to create an outpost on Zmeiny Island, said Natalya Gumenyuk, head of the press center of the security and defense forces of the operational command “South” of the Ministry of Defense of Ukraine.

”We have to monitor their behavior (Russian Armed Forces – ed.) in terms of grouping ships and using other forces. It’s too early for us to form an outpost on Zmeiny Island,” Gumenyuk said in an interview with CNN.  “Our forces have not yet landed on the island,” she said.#UkraineWar #Russia #Ukraine

Putin: The West has trapped itself

The collective West has trapped itself, because it could not predict the tendencies that will contribute to the weakening of its global dominance, said Russian President Vladimir Putin.

As he pointed out, those he talks about think “roughly like Russia, they think like us, in fact.”
“There are many like-minded people: countries, people and nations who want to go their own way, which is based on the principles of true multilateralism,” he added.

Multipolarity would unite the world

The West is using Ukraine to rein in Russia
Putin estimated that the West today cynically uses millions of Ukrainians as consumables in its geopolitical games and attempts to restrain Russia, and that in the “American” world, the rights of everyone else are simply being trampled upon.

“The so-called collective West assumes in its actions that their models of liberal globalism have no alternative. And this model, let’s call a spade a spade, is just a renewed version of neocolonialism and nothing else. It is an American world, a world for the elect, in which the rights of all others are simply trampled upon. “The obvious confirmation of that is the fate of many countries and peoples of the Middle East and other world regions, and today – millions of people in Ukraine, which the West uses so cynically as consumables in its geopolitical games and attempts to restrain Russia,” the Russian leader explained.
He added that these attempts at restraint are nothing but a desire not to allow Russia to develop at the necessary pace and on the basis of the traditional values   it needs.
“What kind of restraint is that?” It is simply a fight against Russia, “he concluded, Sputnik reported