The situation for the units of the Armed Forces of Ukraine in Lisichansk and its suburbs is deteriorating.  The encirclement is shrinking.

▪️The Armed Forces of the Russian Federation and the NM of the LPR, developing the offensive from Privolye, occupied Shipilovka and entered the outskirts of Novodruzhesk.

Apparently, the last road to Lisichansk from Belogorovka was intercepted in the Shipilovka area.  There is no tight control of the entire territory yet, so the encircled units of the Armed Forces of Ukraine may still try to leave the city at night in small groups.

▪️ In the south of Lisichansk, a gelatin plant and the village of the Matrosov mine were taken.  The allied troops approached the multi-storey building from the west.  There are fights.

The units of the Armed Forces of Ukraine and foreign mercenaries who did not have time to retreat from the city will have to make a choice between captivity and destruction in the coming days.

The situation with the Lisichansk cauldron today:

1. The Lisichansk-Seversk road has not been physically cut yet. That’s how they cut it, then it will be possible to talk about the boiler. So for now, we can only talk about the operational environment.

3. Fighting also continued in Lisichansk. Statements about 30 or even 50% control of Lisichansk most likely stem from the fact that the Lisichansk Oil Refinery and adjacent villages + outskirts + industrial zones are considered here. The city center is still firmly under the Armed Forces of Ukraine. For now.

The Snake island is kept under fire control – that is, at any time it can be hit by aircraft and rocket and artillery weapons of the RF Armed Forces

The situation on the fronts for the past day:

▫️On the Kharkiv front, Russian air defense systems shot down two Su-25 aircraft of the Ukrainian Air Force in the Barvenkovo   area. There was no progress on either side. A counter-battery fight is being carried out near the border points.

▫️On the Slavyansk sector of the front, the DPR forces are conducting offensive operations in the direction of the city of Slavyansk. The enemy occupies a prepared line of defense, but suffers losses from the work of our artillery.

▫️On the Lisichansk front, offensive operations are being carried out from Volcheyarovka towards Maloryazantsevo with access to the western outskirts of Lisichansk. Also, Russian troops are advancing towards the village of Lisichansky from the recently occupied oil refinery of the same name on the outskirts of the city. According to unconfirmed data, Privolye and Shipilovka have been liberated. The Armed Forces suffered heavy losses in the area.

▫️In the direction of Seversk, the Allied Forces are developing success and are advancing. In the afternoon, according to unconfirmed reports, Russian troops liberated the settlements of Disputed, Zolotarevka and Belaya Gora.

▫️On the Donetsk front, hostilities are intensifying in the area of     Vogledar. There, the Armed Forces of Ukraine made an attempt to counterattack in small groups, but suffered losses and were forced to retreat.

▫️On the southern flank – without much change. Today, Polish mercenaries fighting on the side of the Armed Forces of Ukraine tried to break through the defensive lines in the Nikolaev region, but were almost completely destroyed by Russian special forces. Disturbing artillery fire is applied to the accumulations of manpower and firepower of the VFU. 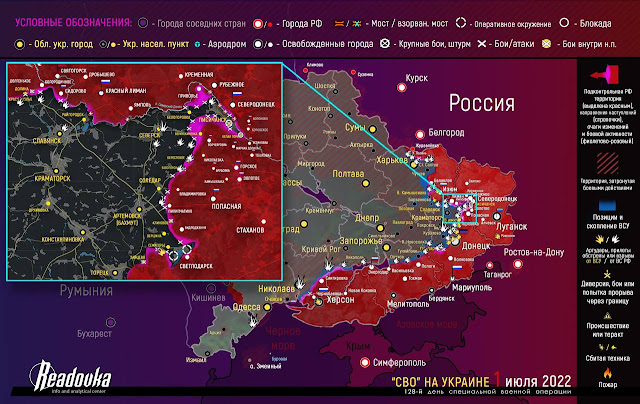 Press TV’s field reporter, Johnny Miller give us his update on the latest missile strike in Odessa as well as the Russian withdrawal from the Snake Island.

▪️ Allied troops have approached Lisichansk, Ukrainian troops are suffering heavy losses. In the suburbs, the villages of Privolje and Šipilovka have already been liberated, and the cleansing of the Nazis from Novodružjesk is underway

▪️More than 30 citizens of LNR were released through exchange

▪️98% of those released from Ukrainian captivity were tortured, said the DNR ombudsman

A WARNING OF RUSSIAN MINISTRY OF DEFENSE:

▫️ In order to implement this provocation, up to 20 representatives of foreign mass media, as well as employees of the United Nations International Children’s Emergency Fund (UNICEF) had been transported to Odessa from June 26 to 28, 2022.

▫️ In case of attacks launched by units of Russian Armed Forces at the bases of Ukrainian armed groups, the military administration of Odessa region plans to simulate the destruction of a social facility where a crowd of actors (up to 30 anti-Russian activists) have been prepared to play the role of murdered and wounded people.

▫️ All the participants of the staged scenes are to be paid 500 USD, while each of them has already been paid 100 USD in advance.

❗️ We warn the international society and organizations that this and other similar fakes about the alleged atrocities of the Russians fabricated by Ukrainian authorities with support of western supervisors are planned to be widespread in the mass media. We emphasize again that the Russian Federation Armed Forces do not launch attacks at civilian infrastructure facilities and treat civilians with an exclusive humanity during the special military operation.