By The Light In The Dark Place
Contributor profile | More stories

FEATURED VIDEO: The Veil is Down;; the Deception is So Great Only the Spirit of the LORD GOD could Penetrate it;;

Backup Video Link: The Veil is Down– the Deception is So Great Only the Spirit of the LORD GOD could Penetrate it–

Description: The Delivery is Rolling Out Now so WATCH THIS as to be READY!!!

The Statue of Liberty signifies the liberty that god’s angels took when they choose licentious freedom over legitimate freedom in Christ.

The Statue of Liberty is holding a penis in her hand:

Why is the Statue of Liberty holding a penis in her hand that is a burning torch?

She is burning the light energy that came from the angels who got exiled into the host body system!

Here is an image showing the ‘spark of life’ that occurs upon the conception of life when a sperm cell contacts the female egg.

The penis is the mechanism used to inject God’s angels (via seminal fluid) into the womb (matrix) that traps them in the inverted flesh host body.

(Learn more: God Moved Upon the Face of the ‘Waters’ and The Woman in ‘Purple’ – Bible Truth Never Before Seen!).

The spark of life is carried through semen and the Statue of Liberty (aka. the Mother of Exiles) is burning it up!

They put this truth and much more right there in Ghostbusters II! Watch this movie clip:

Pay attention and listen to the dialogue of what’s going on in this scene from Ghostbusters II:

“But come on! There gotta be a few sparks of sweet humanity left in this burned-out burg. We just have to figure out a way to mobilize it.” 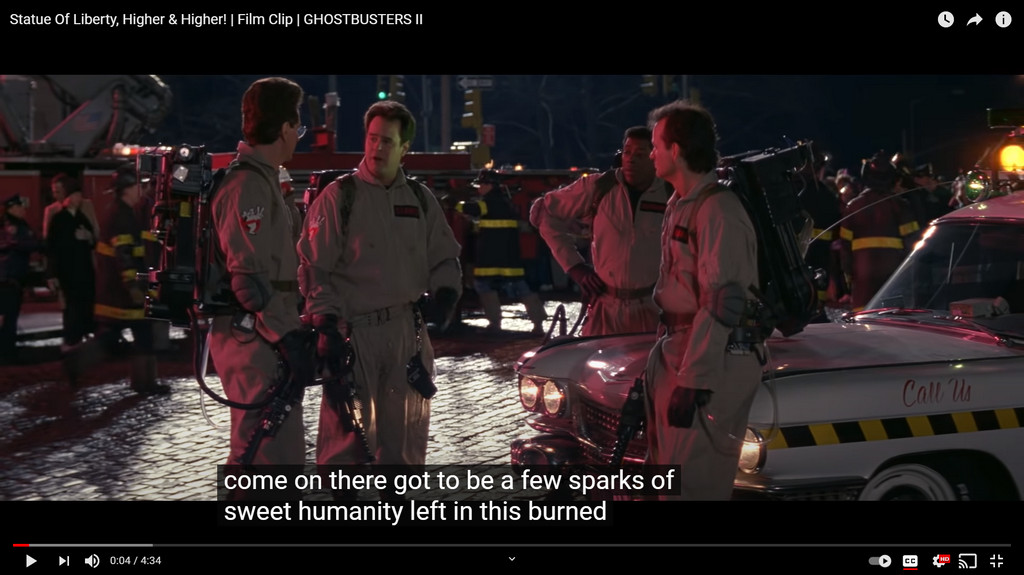 “We have to squeeze some New Year’s juice out of you Big Apple.”

The Big Apple is euphemistic of the ‘forbidden fruit’ in Genesis, that we all know wasn’t an apple – it was fornication with another race.

Again, the Statue of Liberty signifies the liberty that god’s angels took when they choose licentious freedom over legitimate freedom in Christ.

They are playing the song Higher & Higher, “Your love keeps lifting me higher” because that’s them speaking about how the sexual life-force energy they are consuming via semen through the host body system is providing the energy to lift them out of the pit!

They spray ‘slime’ representing semen all up in the Statue of Liberty!

Look how they even show the life energy pulsating (just like ‘the spark of life’ in semen) inside the Statue of Liberty!

This is a manifestation of the angel of the bottomless pit portraying the liberty (licentious freedom) to have sex with the female creation, which caused the exile of god’s angels from heaven to the earth trapped in the human host body system.

The Statue of Liberty is filled with semen carrying the spark of life energy and this host body system is the medium whereby the other side ‘Sitra Achra’ evil is rising up out of the pit.

The Statue of Liberty sits on top of an 11-pointed star (hendecagram), which represents a Qliphoth (peel, husk, shell that is inherently evil). 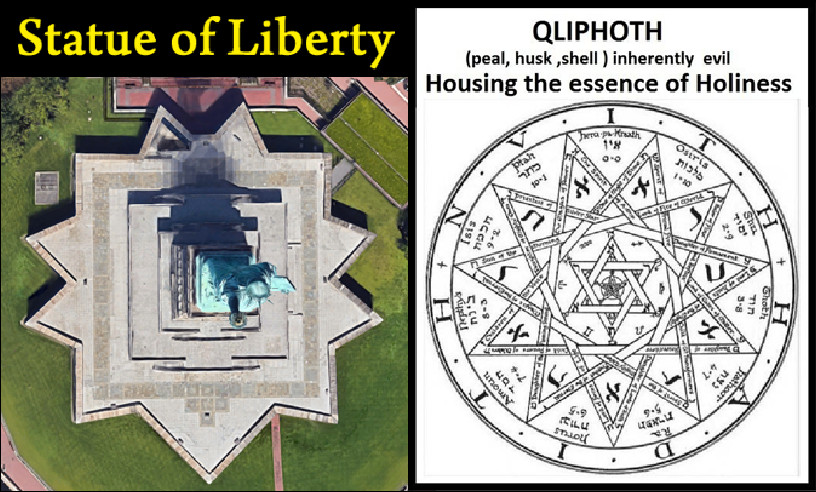 The Qliphoth (peel, shell, husk) are the representation of evil or impure spiritual forces in Jewish mysticism, the polar opposites of the holy Sefirot. The realm of evil is also termed Sitra Achra.

(Learn more: Architecture of Statue of Liberty Reveals: We Are Slaves!).

The Statue of Liberty represents the angels that got exiled, carried away captive to Babylon, the land of confusion (mixed race).

They show this truth right there in Ghostbusters II!

Romans 8:21 exemplifies the two types of “liberty” in the Bible:

“Because the creature itself also shall be delivered G1659 from the bondage of corruption into the glorious liberty G1657 of the children of God.” (KJV Holy Bible)

See the difference between the two forms of liberty?

Eleutheroo (masculine) is to be exempt from mortal liability – that’s the freedom we receive when Christ atones for our sins and saves our soul granting ur eternal life.

Eleutheria (feminine) is the licentious freedom that god’s angels exercised when they left heaven to come into the Mother of Exiles flesh host body system represented by the Statue of Liberty. Where the angels now have licentious freedom to have sex, however, this ‘liberty’ is actually slavery to a flesh sin system, and the wages of sin is death.

In Ghostbusters II, the Statue of Liberty is empowered by the ‘slime’ (seminal energy) to break free and cross over to NYC rising up out of the water!

She then tramples on this police car that is framed up by a building advertised as “Fred”.

The name meaning of Fred is peaceful ruler.

They are showing that the evil from the pit is going to rise up through the Mother of Exiles host body system and crush ‘the peaceful rulers’ here on Earth! That’s why they framed up this scene in Ghostbusters II!

Satan’s reign on Earth through the host body system means no more peaceful rulers like the police are going to have governance anymore. (In fact, that’s exactly what we are seeing in these end times with all the hate groups: ACAB 1312, BLM, WOKE, EXTINCTION REBELLION..).

DECODED: DIMENSIONS OF THE STATUE OF LIBERTY

These are the dimensions of the Statue of Liberty:

Here are the definitions of the Statue of Liberty dimensions when you look up that number in the Bible:

These dimensions were all spiritually orchestrated by the other race run by Abaddon (who is the angel of the abyss, Satan) manifesting his agenda of the Mother of Exiles system.

Through their indecency and lawlessness, they are incessantly (unceasingly) moving towards their goal of rising, to go up, out of the abyss releasing Abaddon and his locust-scorpion race unto the earth!

The agenda coincides with the end goal of the Mother of Exiles, which was to exile god’s angels into the host body system and separate their energy from the LORD God by trapping them in the sinful flesh.

Then, using their energy (soul) that goes to hell in order to provide the energy for Satan’s new locust-scorpion race to ascend out of the pit and make war against the LORD God and his angels from heaven.

Watch the complete video presentation at the beginning of this article to see these pieces of evidence: ‘Still I Rise’ Google Doodle poem by Dr. Maya Angelou, Alicia Keys Girl on Fire, Debbie Harry – diamonds at my thighs spirit cooking party.

They all are extremely significant to what the Statue of Liberty (Mother of Exiles) represents and how this spiritual war is playing out here on Earth.

In order to undo that, it’s not that easy.

There is only one way to do it – and that is by unconcealing the truth that has been hidden from you.

The only way to unconceal the truth is to turn the world upside down because you were inverted when you came into the system.

You have been birthed into an upside down world. You got inverted in a host body where there is a right-side-up you and an upside-down you. That is your prison.

Angels got led away captive to the earth into a host body system where there is a ‘good you’ and a ‘bad you’ fighting over your temple.

You live out your life not knowing your condition. If you die in this condition, divided between good and evil, your energy goes to the bottomless pit.

If you get converted, one eye gets flipped and the two become single and your whole body full of light. Becoming full of light means when your host body dies, you return back to the source of light which is heaven because you have been reconciled. (Read: Jesus’ Ministry That Opens Your Prison – Jesus Read It From Isaiah – Heads Up).

That’s why Jesus was crucified between two thieves, reconciling the ‘good you’ and ‘evil you’ through the cross, making one new man of peace. (See: Introducing the Simplicity of Salvation).

The bagua mirror is a perfect manifestation of this spiritual reality.

The Difference Between Bagua Concave Mirror and Convex Mirror:

There are two types of bagua mirrors: one mirror is convex (bowed outward) to repel actively harmful energy and the other is concave (hollowed inward) to absorb and nullify passively negative energy. 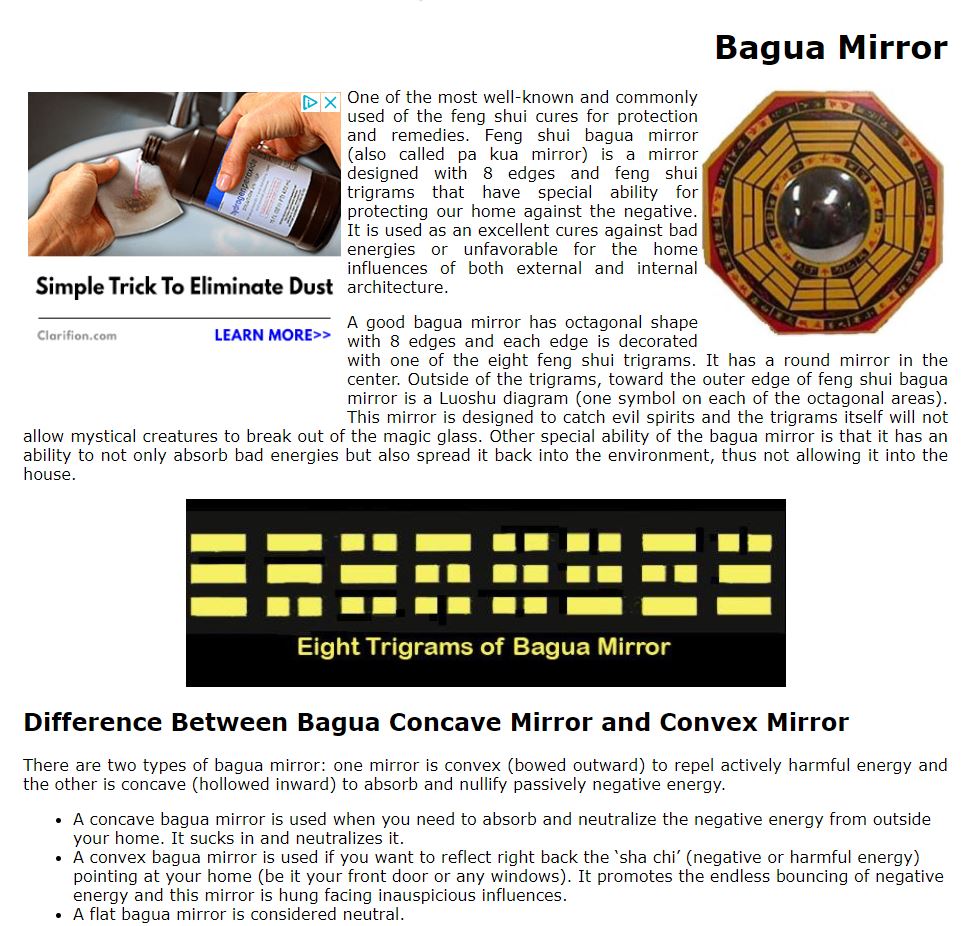 When you look into a concave mirror, your reflection is turned upside down! The concave bagua mirror is used when you need to absorb and neutralize the negative (evil) energy!

WOW! That’s exactly what happened to us angels, we got cast into upside down flesh host bodies – they are (peel/shells/husks) Qliphoths and inherently evil!

The ‘good you’ and ’bad you’ are fighting over your temple.

All of this was unveiled by the Holy Spirit to Jonathan Kleck – it’s a gift of spiritual revelation.

We welcome you to visit: THIS IS IT Be4theFire

The Truth About Ghostbusters, Statue of Liberty, and the Spiritual World We Live In

The Joker’s ‘Ace in the Hole’ Revealed

The World Has Become ‘No Country for Old Men’

Dr. Fauci’s Coat of Arms and the Spiritual Truth About Social Distancing