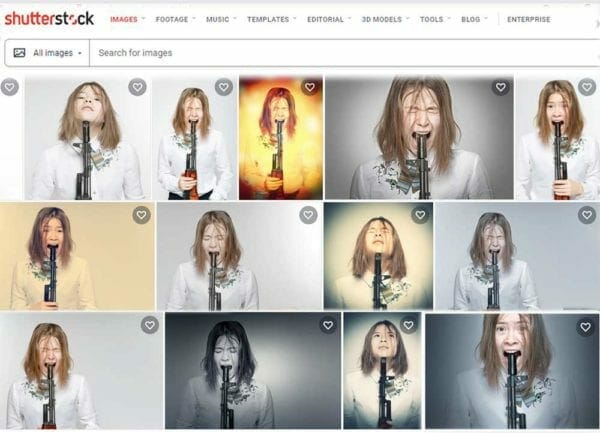 USA –  -(AmmoLand.com)- The images are disgusting and above all else extremely dangerous: a crying woman with an AK barrel in her mouth, children pointing guns at their own heads, pregnant women pointing guns at their belly, a toddler pointing a Glock with their finger on the trigger – 1000’s of photos of children with fingers on triggers. 10,000’s of more images of adults carelessly mishandling what look like real guns!

These are stock images, known in the trade as photo illustrations, because they are set up in advance, as opposed to actual news photographs, which are taken live as news happens. Apparently, the majority of photojournalists have no understanding of basic gun safety. The big image licensing businesses take no responsibility, provide no safety guidelines, and choose to ignore the real-life dangers in the name of profit.

Not only do the images violate almost all of the basic tenets of gun safety, but they also portray gun handling that’s life-threatening, and they clearly exploit the children involved. Most of the images could never be used by a newspaper or legitimate website, as they depict suicide attempts and far worse.

Access is easy. These stock photographs websites can all be searched and browsed for free and the images can be purchased individually for a nominal fee or through a paid subscription. There are no age requirements or other safeguards in place to protect children from viewing these dangerous images. There are no warnings about the portayal of life-threatening gun handling?

They’re offered by multiple image services across the with the largest being Shutterstock, Getty Images, and Getty’s discount subsidiary, Stock. These stock photo companies have massive archives and a broad reach.

Getty maintains an archive of 415 million photos and other digital assets from more than 340,000 individual contributors. Getty’s iStock brand has 125 million photos in its archive.

Shutterstock offers more than 300 million photos from more than 1 million contributors and operates in more than 150 countries.

Theirs is a multi-billion-dollar global business. It’s e-commerce on a massive scale. 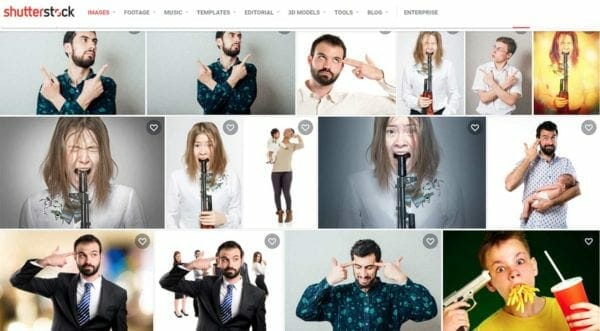 All of the stock-image firms say they support press freedom, cultural awareness, creativity, and the rights of their contributors, but none of them were willing to discuss their stock photos depicting exploited children dangerously mishandling firearms.

Neither Shutterstock nor Getty Images or iStock returned the SAF Investigative Journalism Project’s calls or emails seeking comments for this story.

Similarly, none of the major organizations representing individual photographers were willing to comment for this story, including the National Press Photographers Association, the American Society of Media Photographers, American Photographic Artists, and the Professional Photographers of America.

Dr. Roy Lubit MD, Ph.D., is board certified in psychiatry, child and adolescent psychiatry, and forensic psychiatry. He is an expert at evaluating emotional trauma in children and adults (PTSD) and traumatic brain injuries (TBI). He has served as an expert in criminal and civil sexual assault cases, civil rights cases, and psychological/psychiatric malpractice cases. Dr. Lubit has strong opinions on these 1000’s of reckless stock photos.

“I think it is best if children are not exposed to pictures of violence or pornography, and especially to things that involve other children. It’s problematic when people become desensitized to images of violence and inappropriate behavior, and it can also be very scary and upsetting,” he said. “Adults have slowly learned about the problems of the world and can deal with it, but for children, it will be much more shocking to see violence and much more likely that inappropriate images could impact their opinion of what happens in the world. And certainly, images of children with firearms could be very scary for them.” 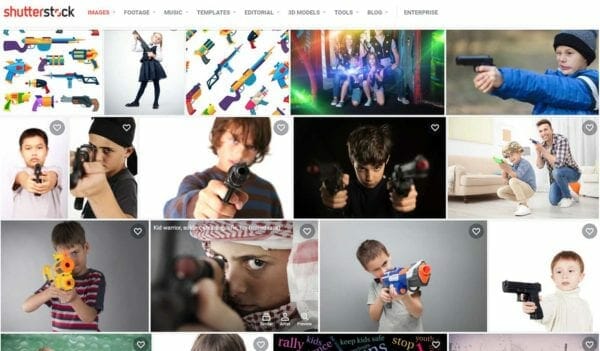 Dr. Lubit is not alone in his opinion.

Dr. Helen Grusd is a licensed clinical psychologist, past president of the Los Angeles County Psychological Association, and a past board member of the California Psychological Association’s Division of Clinical Psychology. She is a Certified Forensic Consultant by the American College of Forensic Examiners Institute and has worked on cases dealing with PTSD, sexual harassment, car accidents, and the psychological effects of alleged negligent surgery. She works with children, adults, and adolescents.

Dr. Grusd, too, has strong opinions of the stock images involving children and firearms.

“I think they’re very dangerous. I think children are very vulnerable, and when they look at a picture, they see it over and over again. It’s stored in their memory banks, and they think it’s okay. I don’t know if there are voices in their lives to say that they’re precious and that life has value. I don’t know if they think it’s funny or fun, or if they offer a sense of power over their environment, in which they feel helpless, or if they come from a culture – mostly teens – where they have to prove they’re okay if empowered,” she said. “If they’re depressed, they might think it’s okay to use a gun … You don’t use violence. You don’t fight back with guns and violence. You should fight back with strong words and strong action. These images are toxic.”

Unified Reaction & Disgust By Those Who Live by Gun Safety

While the stock-image companies were all unwilling to address their dangerous photographs, pro-rights and Second Amendment organizations, leaders in portraying responsible gun handling, were united in their outrage.

“I find these images incredibly disturbing – they could become weapons themselves if viewed [or copied] by young children,” said Second Amendment Foundation founder and executive vice president Alan M. Gottlieb. “The media is clearly profiting by promoting gun violence, which is something they have accused the firearms industry of doing for years.”

“If you want to talk about an ‘epidemic of dangerous gun use,’ the blatant disregard for basic gun-handling safety standards by thousands of so-called professional photographers and every single major image licensing service is shocking. AmmoLand News has paid subscriptions with iStock, Getty, and others but it is very difficult to use almost every one of their images depicting firearms as they promote careless, if not life-threatening, gun misuse.” said Fredy Riehl, Editor-in-Chief of AmmoLand News.

“It may be a toss-up as to what is more detestable: these gruesome images or the Bloomberg apologists and other gun control lobbyists who squeal like stuck pigs whenever they see an NRA picture with an adult and a child practicing safe and responsible firearm handling,” said Marion Hammer, former president of the National Rifle Association and current NRA board member. “The double-standard is glaring and the gratuitous promotion of gun violence is disgusting.”

“The firearm industry has known that many in the media harbor a bias against firearms and it is a rare occurrence that firearm ownership is framed in a way that shows responsible ownership. Depictions of children mishandling firearm and even negligently pointing them at themselves or one another is reckless and only serves to drive a political agenda to vilify guns and gun owners,” said Mark Oliva, public affairs director for the National Shooting Sports Foundation.  “This is frustrating because if runs counter to the good that the firearm industry is doing through Project Childsafe. That program has brought partnership with 15,000 law enforcement agencies in all 50 states to distribute more than 40 million free firearm locking devices to ensure that firearms remain beyond the reach of those who shouldn’t haven them, including unsupervised minors. That program has been praised by the Government Accountability Office and the National Safety Council for the efficacy in reducing the negligent misuse of firearms to historic lows. That’s just one aspect of the Real Solutions campaign the firearm industry is leading to bring true gun safety to America.”

“I think it’s best that people know that the majority of firearms owners are not Elmer Fudd. We are not out there trying to do stupid crap with guns. We are the most law abiding, rule oriented, safe practiced conservationists that exist. When we take photos, we know they’re portraying the lifestyle that we enjoy,” said Thomas MacAulay, executive director of the Professional Outdoor Media Association. 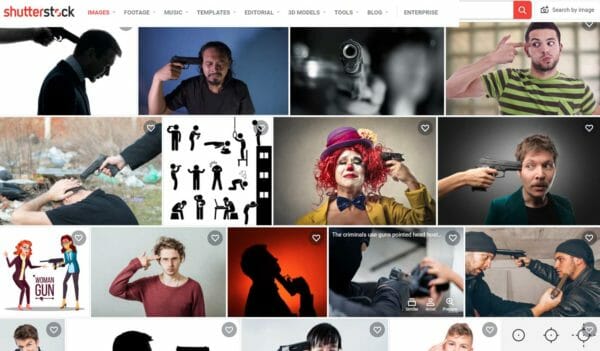 The organization stresses safety above all else, and a “rigid adherence to basic firearm safety protocols.” POMA also offers guidance on the use of minors and warnings about prohibited persons in photos with firearms. As well as best practices involving real guns and prop guns.

Before the photoshoot, POMA recommends: 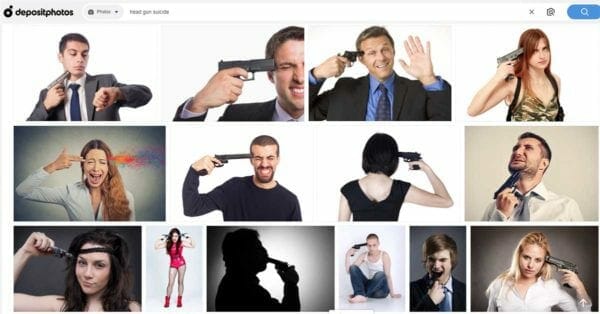 Many of the stock images involving firearms violate the basic rules of firearm safety, The Professional Outdoor Media Association points out.

“Keeping a firearm always pointed in a safe direction includes not pointing it in the direction of the photographer. Often, we’ve seen images of firearms staring directly down the bore of the barrel. This clearly goes against this basic rule,” the organization states. “Never point firearms at other models, yourself, or anyone else during the media shoot. All weapons should be ‘pointed down range’ meaning in a direction that has nothing you intend to ever shoot.”

“The photo of the man simulating using a gun while holding a baby in his arms, and an apparent minor with a handgun pressed to his temple are particularly disturbing images,” Schaeffer said. “Using children in these types of photos or to advance a platform could potentially be a form of child exploitation or neglect, depending upon the jurisdiction.”

This story is presented by the Second Amendment Foundation’s Investigative Journalism Project and wouldn’t be possible without you. Please click here to make a tax-deductible donation to support more pro-gun stories like this.

Lee Williams, who is also known as “The Gun Writer,” is the chief editor of the Second Amendment Foundation’s Investigative Journalism Project. Until recently, he was also an editor for a daily newspaper in Florida. Before becoming an editor, Lee was an investigative reporter at newspapers in three states and a U.S. Territory. Before becoming a journalist, he worked as a police officer. Before becoming a cop, Lee served in the Army. He’s earned more than a dozen national journalism awards as a reporter, and three medals of valor as a cop. Lee is an avid tactical shooter.