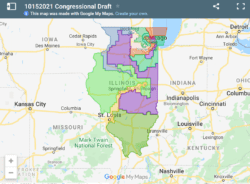 Democrats in Illinois’ state legislature Friday released a new map that would shore up all of their party’s incumbents in Congress and likely eliminate two of the state’s five Republicans.

The proposal would give Democrats a 14-3 advantage in the state, compared to the current 13-5 map. Illinois is one of several states losing a congressional seat this upcoming decade, and the new map, if adopted, would shore up Democrats in Chicago and its surrounding suburbs and create a winding Democratic seat that stretches from East St. Louis up through the middle of the state.

That district includes much of what is now held by Republican Rep. Rodney Davis, and includes Springfield, the state’s capital, Decatur and Champaign, home to the University of Illinois. The new map also shores up Rep. Cheri Bustos’ northern Illinois seat by having it encompass Bloomington, home to Illinois State University.

While most incumbent Republicans would likely be pit against each other, Rep. Adam Kinzinger would likely have to run against Democratic Rep. Marie Newman in a suburban Chicago seat, making him an underdog for re-election.

“This redistricting process has been anything but transparent, which comes as no surprise to anyone,” Kinzinger said in a statement Friday. “I believe the people of Illinois deserve better.”

Illinois is just the latest state where the party holding the legislative majority is attempting to maximize their advantage. Oregon adopted a new map that shores up its Democratic incumbents while creating a new seat that leans left, while legislatures in Texas and Georgia have released maps that protect Republican incumbents and target Democratic ones.

Content created by The Daily Caller News Foundation is available without charge to any eligible news publisher that can provide a large audience. For licensing opportunities of our original content, please contact licensing@dailycallernewsfoundation.org