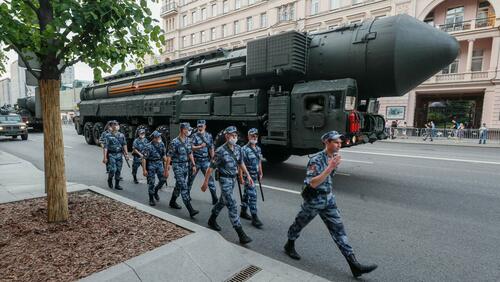 Authored by by Kyle Anzalone via AntiWar.com,

The Joe Biden administration has sent several warnings to Russia via backchannels regarding the possible use of nuclear weapons in Ukraine, the Washington Post reports. The White House’s messages to Russia have been intentionally nondescript to foster uncertainty in Moscow about what the US would do if Russia deployed its ultimate weapon.

The White House has sent the message several times since the war in Ukraine started, according to the US officials who spoke with the Post. The White House’s communications with the Kremlin have been intentionally vague.

“The United States for several months has been sending private communications to Moscow warning Russia’s leadership of the grave consequences that would follow the use of a nuclear weapon, according to U.S. officials, who said the messages underscore what President Biden and his aides have articulated publicly,” The Post wrote.

The Biden administration believes these nonspecific threats will deter Russia through “strategic ambiguity.” ”Strategic ambiguity” is an intentionally unclear policy that causes the enemy not to act out of fear it could cross a red line without knowing it.

For nearly 50 years, the US maintained a policy of “strategic ambiguity” toward Taiwan. By refusing to commit to defending the island, Washington has deterred Taipei from declaring independence. At the same time, suggesting it could defend Taiwan has deterred China from acting more aggressively against the island.

However, Biden has taken steps towards abandoning “strategic ambiguity” towards Taiwan. Since taking office, Biden has said he would go to war for Taipei four times.

President Vladimir Putin warned last week that he could order a nuclear strike to defend Russian territory. Putin’s threat was Moscow’s most direct warning it could deploy nukes. “If the territorial integrity of our country is threatened, we will without doubt use all available means to protect Russia and our people – this is not a bluff,” Putin said.

Former Russian President Dmitry Medvedev appeared to expand this nuclear umbrella to Ukrainian territories Moscow plans to annex. The Kremlin planned a series of referendums in areas of Ukraine under its control. If the vote goes as expected, those regions will request entrance into Russia, which Moscow will accept.

They said NATO expansion wouldn’t be escalatory. It was.

They said giving Ukraine long-range weapons wouldn’t be escalatory. It was.

Now they promise Putin is bluffing. Do you trust them? pic.twitter.com/GITpU5FQnJ

The Post says it is unclear if the White House reissued the threat after Putin’s statement this week. In January, Moscow and Washington reaffirmed the statement, “nuclear war can never be won, and must never be fought.”